Luxury gets cloned in Seoul

Luxury gets cloned in Seoul 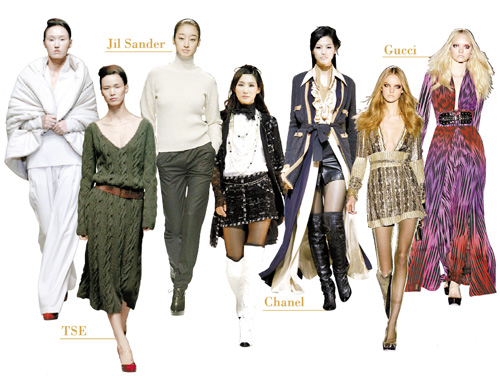 Once every spring and fall season, Chanel and Gucci fashion shows take up the talk of the most fashionable side of town as the luxury in show productions gets more luxurious. And the point of luxury here is to replicate the original show as closely as possible, at a happening venue on the opposite side of the globe.
Even a few seasons back, a luxury fashion show was nothing more than a handful of local models wearing samples in a store. That quickly evolved and expanded, however, to pump up brand power in the fast-growing Korean market. The subsequent increase in sales led to brands trying harder to emulate their home shows, competing to be on the frontline of fashion.
Styled after Karl Lagerfeld’s Paris runway show at the Grand Palais earlier this year, for the 2006 fall and winter collection on Aug. 31, Chanel Korea transformed the Grand Hyatt into a golden arcade that led to a golden stage for the show and golden halls and booths reserved for dinner guests.
In addition to the Paris inspiration is the Chanel Korea formula: Unlike most fashion events in Korea where organizers strictly assign seats to those in the front row and the press, the Chanel show, which attracts 1,000-plus spectators ― from society ladies to industry professionals to Chanel fans ― has a simple, democratic rule of seating: first come, first served. And, along with local models, the catwalk is highlighted by two Korean pop stars, with the young male actor usually becoming the toast of the all-ladies show.
The miniature Chanel show in Seoul presented essentially Chanel pieces in ensembles, suits and dresses in luxurious materials in tweed, cashmere and silk in new proportions inspired by the mod 1960s and rock-chic ’70s. The show opened with an ensemble of an elongated jacket, a mini skirt and thigh-high boots; the theme of “long on short, short on long” continued throughout the show. Those who have inherited or own vintage Chanel pieces in black and white and faux accessories can save up on big money this winter ― as long as the outfit is updated with python thigh-high boots with very ’60s heels and a “Coco’s cabas,” an extra-large tote bag in patent leather.
In sync with the season’s covered-up look, Lagerfeld layered a thigh-grazing boucle suit with a floor-length coat, while dark colors were lightened up with silk blouses in white and pastel pink. Ethereal evening gowns in black were encrusted with crystals, capturing the moment of red carpet glamor. The overall effect was modernity built on heritage.
TSE’s fashion show at 2 p.m. on Monday at the Shilla Hotel had a couple of messages for industry people. One, fashion is business, after all. Two, cashmere, the staple in cold seasons, can have a trendy side. The show opened with the light and comforting elements of cashmere: an off-white outfit, a puffy cape worn over a pair of wide pants that waved fluidly on a white runway.
Undeterred by cashmere’s comfort zone, TSE’s color palette shifted gradually from ivory, beige and then to slate gray, blue gray, midnight blue and black as the hemline moved up ― to bare legs ― and down ― to cover all. While dresses hiked all the way up to show legs elongated by red platform heels, the more classic 1950s-inspired skirts were gathered at the waist to give volume, safely covering the knees. The strength of the collection lies in TSE’s timelessly modern staples ― a cowl-neck tunic, a trenchcoat, a cable-knit cardigan, a crocheted cape in elegant colors ― that can be worn with the season’s hot items, such as leggings, mini and maxi dresses.
Jil Sander had its first mega-show in Korea since its local importer, Jihyun Trading, opened the store 11 years ago in the Galleria Department Store in Seoul. Along with Giorgio Armani, the German label’s superbly tailored outfits in muted colors quickly became the favorite of Korean high society, which led to opening of a flagship store in Cheongdam-dong in 1997. 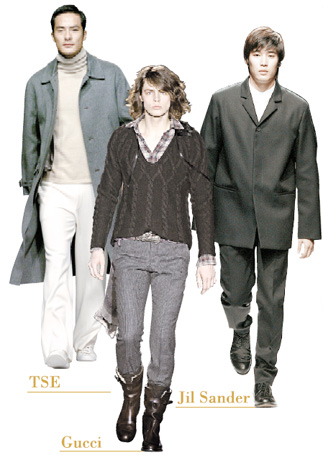 The show at the W Seoul Hotel on Aug. 30 was the much-publicized debut collection of 50 outfits by Raf Simons. The Korea event was attended by Gian Giacomo Ferraris, Jil Sander’s chief executive, and Roger Holmes, a managing director at the U.K.-based investment fund Change Capital Partners LLP, which purchased Jil Sander from Prada Holding N.V. in February. When asked about the global chief’s personal visit to the fashion show in Korea, “It was a logical decision to come to Korea for the Jil Sander’s first fashion show,” said Andreas Bergbaur, Jil Sander’s head of communication and PR.
The hype about the Gucci fashion show started weeks before it actually took place last week at the Shilla Hotel. With the over-the-top reproduction of the Milan runway transferred to Seoul and 15 foreign models flown in from Hong Kong, the show was the closest Gucci could ever come in Asia. The Gucci show even came with a “hush-hush” after-party at the Club Asia Chow where some 50 “Gucci people” got to devour an infinite supply of Mumms.
It was obvious that Gucci Korea wanted to offer, thus executed successfully, the ultimate Gucci moment to “been-there, seen-that” trendsetters in town, who can be highly critical of less-than-perfect replica shows, local models and after-parties, who or which don’t adequately convey the language of exclusivity in luxury fashion. The anticipation for the Gucci experience started from passing a dark hall to reaching a room of gold mirrors ― and champagne of course ― where a golden “GG” logo the size of a manhole is emblazoned on the ivory carpet. The other half of the hotel’s Dynasty Hall was another box of gold walls and a runway that lit up in red and violet. When some of the world’s most photographed Gucci numbers ― a burgundy red mini dress and a gold-sequined knit dress ― on Gemma Ward look-alikes were brought to the stage, it was a rock-star moment everyone had been waiting for.
For women, Gucci goes glitters, gold and glamor a la Studio 54 all the way, in deeply cut micro-mini tunic in neon hues, reminiscent of early Versace by Donatella. Even razor-sharp suits in ivory and gold are designed not for businesswomen in board rooms but for a Madonna dancing in the back room. Like Chanel, the play with proportion comes to mind ― for the rest of the year, it’d better be a mini or a maxi, and nothing in-between.
Interspersed between the Gucci women’s extreme hemlines was John Ray’s last menswear designs for Gucci before Frida Giannini took over in February. If Gucci women get ready to disco under crystal balls, their wild and romantic dates make for unlikely matches. With trousers tucked into high boots, an oversize sweater peaking ruffles at the neck, and dark voluminous coattails floating behind, men with streaming hair looked as if they had come in from “Wuthering Heights.” And the flowing scarf at the waist? If it were used to wipe away spilt champagne it might be a kind gesture, although a bit too Fabio-esque.