Sitcom maestro has the right formula for laughter unlimited

Sitcom maestro has the right formula for laughter unlimited

All the laughter suddenly coming from Korean homes has been inspired by a new sitcom, “Geochim Eopsi High Kick,” literally translated as “A High Kick Without Hesitation.”
The show airs on MBC at 8.30 p.m. every night. 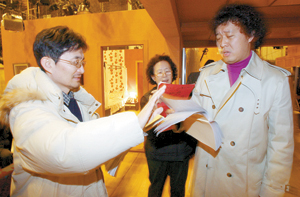 
The producer and director of the show is Kim Byeong-wook, the mastermind behind another hit sitcom, “Sunpung Sanbuingwa,” or “Sunpung Obstetrics and Gynaecology Hospital.” Colloquially, Sunpung can also mean “an easy childbirth.”
The popularity of this sitcom is rising fast and his jealous rivals would undoubtedly love to know Kim’s special secret.
“My sitcoms show the powerful yet hilarious relationships between characters, such as the relationship between husband and wife, father and son, in-laws and so forth,” Mr. Kim said.
In other words, the complicated conflicts and flawed characteristics that many people hide within themselves have become Mr. Kim’s trademarks.
All of Mr. Kim’s sitcoms feature a huge family in which three generations live under a single roof. The grandfathers are usually conservative but very self-centered and shallow. The grandmothers, although they seem submissive, always end up saying exactly what’s on their minds. The fathers or uncles are semi-degenerate and often find themselves in trouble.
“Although the family in my sitcom has a structure that is hard to find in a Korean family today, it is a smaller replication of Korean society and its members,” Mr. Kim said.
In Mr. Kim’s sitcoms, no main character stands out on his or her own and the plots do not revolve around a single character.
Even a teacher who has a crush on the divorced son of the central family plays a key role in several episodes. In other show she might have played a small part.
“The way I work is in the beginning phase I focus strongly on establishing a solid image for each character,” Mr. Kim said. “The feeling that I get when establishing the features of each character is similar to a harvest after the hard work of planting seeds and tending the fields.”
For example, in one episode, the eldest son, Joon-ha, gets drunk and turns into an monster who cannot control his eating. The only person in the family who can tame him is his wife, the Oriental medicine doctor Hae-mi. The wife is the actual power within the family and is the smartest and most reasonable of its members.
Knowing this makes it easier and funnier for the viewers to understand why Joon-ha fears his wife and goes to ridiculous lengths to please her.
Hae-mi is only with Joon-ha because a talented boyfriend broke up with her. In retaliation, she decided to marry the neighborhood idiot to show how miserable she had become.
Other characters have a similarly dysfunctional but funny side. Soon-jae, the grandfather and the owner of the Oriental medicine hospital is the worst doctor and has surrendered control of the hospital to his daughter-in-law. During business hours he indulges in his recently developed addiction to Internet pornography until his new habit is accidentally exposed to his wife and friends, an embarrassing moment for the old man.
Mr. Kim’s shows also take a fresh look at changing family structures.
The difference between his latest sitcom and his previous sitcom is that the daughter-in-law, Hae-mi, has the strongest and most powerful voice in the family, instead of the men. Also, in one previous show, the second son files for divorce because his wife, who is an unpopular pop singer, suddenly feels the urge to study in Russia while leaving her baby and her husband in Korea.
Devising this role for a woman, in which she is more focused on career than family, provoked heavy criticism from viewers who posted their discontent on the show’s Web site. Still, it is Mr. Kim’s unconventional characters that many viewers find irresistible.