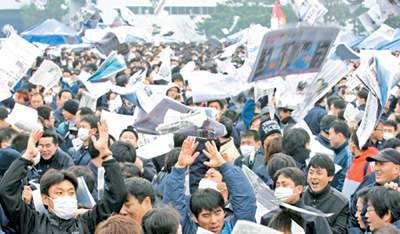 ULSAN - Hyundai Motor’s management has conceded again to its union. Workers at Hyundai Motor Company ended their 20-day job action yesterday after the company agreed to increase its bonus payment to that demanded by the union, 150 percent of monthly wages. The carmaker, however, demanded that the union meet production targets before the cash would be paid, insisting that its principle was “no work, no pay.”
Management and the union also reached an ambiguous agreement that said criminal and civil litigation filed by the company against the union would be resolved “smoothly” in the near future. Earlier this month, union workers assaulted senior corporate officials; the company sued 22 union members because of that attack, and in a separate action demanded 1 billion won ($1.07 million) for work slowdowns and stoppages that have affected production since Dec. 28.
The two sides agreed in talks yesterday that workers would receive the 150 percent bonus ― half again that already paid last month ― after making up production of nearly 29,000 units lost to strikes last year and another 21,000 lost to the just-ended job action. The company estimated that the shortage could be made up by late February, and said it would pay overtime for work to catch up.
The union refused to work six hours in the day shift yesterday, but agreed to resume work on the night shift, which began at 9 p.m.
After the two-day negotiations with the union, Hyundai Motor President Yoon Yeo-chul apologized to the public and to Hyundai customers.
Park Yu-gi, the head of the labor union, said he did his best in the talks, adding that the question of withdrawing Hyundai Motor’s lawsuits would have to be resolved in the future. In this industrial city and in Seoul, the company appeared to the public to have gotten the worst of the bargain, which was seen as another in a string of concessions to its workers that some called unwarranted. “It is very disappointing that the company yielded and compromised, just like it has done in the past,” Labor Minister Lee Sang-soo said yesterday. “Even though the strike has ended, the union’s job action was illegal, and the ministry will call it to account.”
Since the union was established in 1987 at Hyundai Motor, union workers have struck every year except 1994. During the total 335 days of strikes, the company says it lost more than 10 trillion won. Officials said the latest strike added at least 4.3 billion won to that total.
The workers’ monthly wages were curtailed by about 1 million won because of their job action, but the company agreed to increase the number of work days to make up for those losses. An average worker at the automaker earns about 250,000 won per shift. The company will also schedule four 14-hour overtime shifts on Saturdays.
Echoing public sentiment in Ulsan, where civic groups and unorganized residents have blasted the union, Lee Yong-deuk, the head of the Federation of Korean Trade Unions, said yesterday that the gains to workers outweighed the damage to the company ― not a good thing in his eyes. “There was no principle at Hyundai Motor,” he said. “There is only one way to change this labor-management relationship; the company must fight to the end. Management probably was shocked by the public demand to stick to principles. They probably thought it would be better to pay some bonuses and end the strike, but the public asked them to stick to the principles.”
He concluded, “Hyundai Motor only cares about its short-term interest and has no long-term vision.”
The labor union of the Hyundai Motor is a member of the Korean Confederation of Trade Unions, the other, more radical labor umbrella group in Korea.
“We are happy that Hyundai Motor’s strike finally ended, but the labor union must be punished sternly for its illegal actions and labor-management principles must be corrected,” said Kim Young-vae of the Korean Employers Federation.
A 49-year-old Hyundai Motor supplier was outraged. “The company stopped the strike with money, and that is returning to the bad practices of the past,” he fumed.
On the streets here, sentiment was also sour. “Every time, the company has stopped strikes with money and raised car prices, making customers pay for the burden,” said Choi Nae-gyeong, an Ulsan physician. “To ring an alarm bell on this unreasonable Hyundai Motor labor-management relationship, the nation should start a boycott of Hyundai cars.”