Barbecue and campfires lie at the end of the road

Barbecue and campfires lie at the end of the road 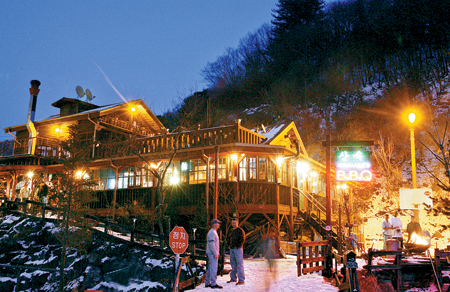 DONGDUCHEON ― The road to Beaver’s on a winter night evokes an odd sense of place. Perhaps it’s the unusual mix of rural landscape and camp-town, since it is near one of the nation’s largest U.S. military bases on the outskirts of Seoul.

A few GI-bar signs flicker on the narrow pathway to the lodge, but the images soon merge with a dusky mountain and the levees of a rice paddy.
When it snows the journey to Beaver’s, which takes roughly ten minutes from the rear gate of Camp Casey, creates an even bigger sense of anticipation.
There are hardly any people around. The village is practically a ghost town.
By the time you find the cozy log house at the end of the road with the sign that reads “sansok,” which simply means “deep in the mountains” in Korean, you feel like you’ve entered another world. You’ve overcome the anxiety of possibly getting lost in a strange mountain village.
The sense of relief is almost overwhelming when you enter the restaurant at Beaver’s to find a 3-year old dog named “ggambi” taking a peaceful nap by the stove. 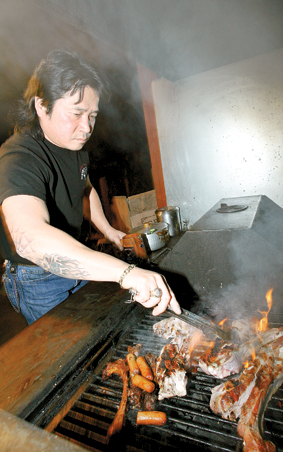 Lee Hee-nam, the owner and a Korean returnee from Arkansas, preparing barbecued pork on a charcoal grill.

The sudden peace of mind is surprising because the restaurant’s decor is nowhere close to meeting the typical Korean definition of a rustic pension house. For one thing, old ballads aren’t playing on the sound system and meals are more likely to consist of pork barbecue than health-conscious tofu stew.
Instead, Beaver’s (or sansok’s if you prefer to call it that) mimics a typical blue-collar American pub with a strong Harley Davidson theme. It’s got a pool table and dart boards.
On a shelf there are stacks of biker magazines and other items that would attract the eyes of testosterone-filled young men. To give you a sense of the place, the coat racks are carved wooden phalluses. The proprietors play heavy-metal music videos all night, and beers cost $3 (3000 won) a bottle, a relative bargain. AKorean returnee from Arkansas opened Beaver’s in 2001. Since then, it has attracted a mixed crowd of Koreans and Americans who have biking, rocking and drinking in common. Its steady visitors, though, have been men from Camp Casey, which is named after a major who was killed during an air crash at this camp during the Korean War. 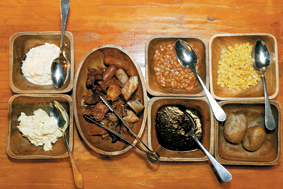 
Beaver’s fits well into the hybrid spirit of the town, which has been catering to Americans for over a half century. The odd merger of American spirit and rustic Korean lodge located only 20 kilometers south of Korea’s Demilitarized Zone is strangely charming. Still, to many Koreans, remembering the town of Dongducheon, which neighbors a main camp of the U.S. Second Infantry Division at Uijeongbu, brings to mind the disturbing history of the country’s war-torn past.
Just when the ghostly image of the camp-town was fading from people’s memories, news hit again in 2002 that two middle school girls were crushed by a U.S. armored vehicle. The incident immediately led to a series of anti-American protests across the country. 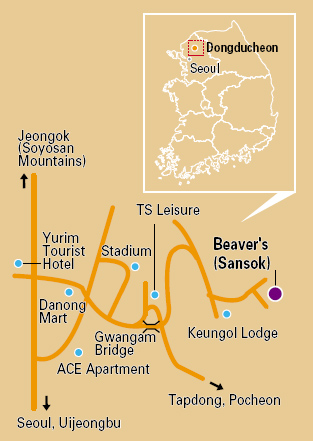 To try to heal its rough past, the city designated a dove as its symbol.
But Dongducheon has more to its history than its politics ― like the Soyu Mountains, which surround Beaver’s.
Their hills are humble in height, sprouting 587 meters above sea level, but they’re known among hikers for their fall leaves.
You haven’t felt the real bite of the town, however, until you get a taste of its food.


One of the major delicacies of the town is “budae jjigae,” which means military stew. It is made up of slabs of canned meat and beans thrown on top of kimchi and chili paste, and was widely eaten during the war. The food is originally from the main camp, but it spread to Dongducheon over the years as it catered mostly to camp visitors.
Beaver’s offers similar ingredients, but with more formality.
The menu is simple. You have a choice of seasoned mud snail and charcoal-grilled pork barbecue, the restaurant’s specialty.
The barbecue set is wholesome.
If you are a Korean over the age of 30, the food here can carry more meaning than its taste, evoking nostalgia for the culture of “PX food.” In the ’70s and ’80s, food from the base was secretly hoarded in local smoke-shops, when canned Spam and corned beef were considered a status symbol of Western exposure. (It was also a trend among children back then to mix rice with soy sauce and a slab of margarine.) PX foods are still fondly recalled among Korean consumers as classic favorites.
To this day Korea remains one of the largest consumers of Spam after the United States and Britain.
Back to Beaver’s barbecue ― the set is distinctively American homestyle cooking. Aside from barbecued meat and sausages (which are the salty kind, true to the American heart and to the tongues of many Koreans), it includes steamed corn and potatoes, canned beans, coleslaw, macaroni salad with a separate rice dish, available on request.

It also comes with one of the best kimchis I’ve tasted in recent years.
When everything is tasted together, it harmonizes.
If you are an adventurous eater or simply want to taste a truly American meal in the Korean style, put a dash of butter, a piece of meat and kimchi on top of a steamed potato and pop it in your mouth.
Just in case you get caught in the snow there are bungalows and a campfire to keep you warm. The lodge has a rooftop suite with a spacious balcony that offers a full view of the mountain village. It’s a simple room with a bed and armchairs, no TV. But the rooftop room has an open window on the ceiling to lend atmosphere.
In the morning, when you encounter framed photographs featuring tattoos and the face of Ozzy Osborne on a TV screen, you can gently remind yourself that after all, you are just “deep in the mountains.”