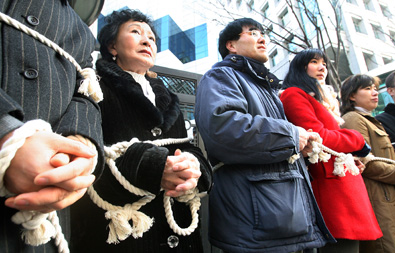 Dozens of human rights activists roped themselves together in front of the Foreign Ministry in Seoul yesterday, protesting the ministry’s failure to prevent China from repatriating North Korean defectors and for not supporting Korean rights workers in China who aid North Koreans fleeing their homeland. [YONHAP]

Despite diplomatic efforts by Seoul, nine family members of South Korean prisoners of war in the North who tried to escape here via China were repatriated to North Korea by Chinese authorities last October.
The Chosun Monthly Magazine, which broke the story, reported that the group was arrested at their temporary living quarters in Shenyang, an industrial city in northeastern China, after having sought sanctuary at Seoul's consular office there.
A Foreign Ministry official confirmed that report yesterday, saying the ministry regretted that they had not been able to save the defectors from their fate. He said Foreign Minister Song Min-soon would raise the issue with Chinese authorities when he visits Beijing next week and seek assurances that such incidents will not recur.
Another ministry official said yesterday that North Korean defectors with links to South Korean prisoners of war in the North are generally given more lenient treatment by Chinese authorities under a mechanism arranged by Seoul and Beijing.
Apparently, when South Korean diplomats in China are approached by North Koreans in that category, they have been kept in a safe house outside the diplomatic premises until they are processed both by Seoul and by Beijing for onward trips to South Korea.
In this case, the JoongAng Daily and other reporters have learned, those arrangements broke down. Apparently there had been an incident earlier in the day in which a group of North Koreans successfully entered another consulate in the city. Later in the day, Chinese police scoured the area for other potential defectors and discovered the nine in their temporary lodgings. The security forces were evidently not aware of the group’s special status.
South Korean officials reportedly alerted the Chinese to the problem, but the group had, it seems, been repatriated too quickly for those efforts to be successful.
Beijing has had difficulty in its attempts to balance its agreement with North Korea to repatriate defectors to their homeland against its human rights obligations under international agreements. Some defectors who found their way to diplomatic or foreign premises have been allowed to travel to a third country, usually South Korea, but others have been returned to North Korea, sometimes to grim fates.