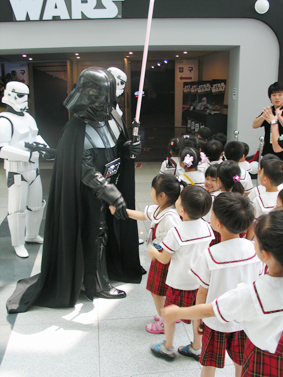 To celebrate the 30th anniversary of the “Star Wars” film series, miniatures, costumes, production and concept drawings, characters and robots used for the films’ special effects are being exhibited at COEX in Samseong-dong, Seoul.
The exhibition, titled “Star Wars ― Science & Art,” arranges objects by episode, from I to VI. The release of the first “Star Wars” movie, Episode IV: “A New Hope,” in 1977, began a new era in special effects. Director George Lucas founded a new special effects company, Industrial Light & Magic, to create the special effects for the films.
Among the objects on display are a battle droid and Anakin’s Podracer cockpit from Episode I: “The Phantom Menace”; Anakin’s Speeder and a mannequin of Padme from Episode II: “Attack of the Clones”; Anakin’s Starfighter, Utapau Sinkhole and medical tables used for Padme and Anakin in Episode III: “Revenge of the Sith”; R2-D2 and C-3PO robots, Darth Vader and Chewbacca from Episode IV; the Millennium Falcon and Imperial Star Destroyer from Episode V: “The Empire Strikes Back”; and Jabba the Hutt and the Imperial Shuttle Tydirium from Episode VI: “Return of the Jedi.” In the exhibition, spectators can see how the designs of miniatures and costumes have developed through the six episodes.


Visitors can also switch on a Lightsaber, take a picture with a blue screen background, speak into a microphone that will make their voice sound like that of Darth Vader and try to move an object using the “Force.”
The exhibition opens at 10 a.m. and closes at 7 p.m. everyday, and continues until March 1. It is held at Jangbogo Hall on the third floor. Ticket prices are from 10,000 won to 13,000 won. For information, call 02-536-3050 or visit www.starwarskorea.com.