Yut positions from left - do, gae, geol, yut and mo

Yutnori is an authentically Korean game.
There are records of its existence since before the Three Kingdoms Period.
Play begins when four wooden sticks are thrown up in the air by a contestant.
Similar to a coin toss, depending on how many sticks land on their top or bottom, the players can move their figures on the yut board.
The objective is to come back to the beginning of the board as soon as possible.
There are five names for each position in which the sticks are able to fall - do, gae, geol, yut and mo. 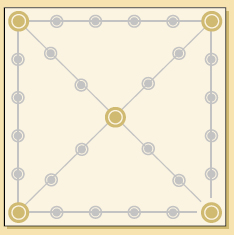 
All five refer to an animal. Do means pig; gae means dog; geol means lamb; yut means cow and mo means horse. The order of the stick positions and the name is said to depend on the size and speed of each animal.


The yut board consists of 29 points making a square, with two lines diagonally crossing in the middle.
The points, according to Joseon dynasty scholar Kim Mun-pyo, symbolize the stars in the sky and the middle point, or bang, is said to be the first star in the constellation of the big dipper.
Yut is played with two or more teams and any number of people can be a part of the game as long as the teams are even.