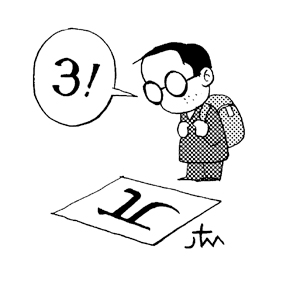 The ratio of a circle’s circumference to its diameter, ? , is 3.141592653 . . . , an infinite decimal expansion. Some people challenge the limits of human memory capacity by memorizing digits in the number. Akira Haraguchi holds the world record, as he successfully recited the value of ? to 100,000 decimal places in 16 hours last year.


In general, the approximation 3.14 is used at school. For example, you would multiply 3.14 by the square of the radius to calculate the area of a circle. However, in many Japanese elementary schools, 3 is substituted for the value of ?. According to the instructional guidelines of the Japanese Ministry of Education, Culture, Sports, Science and Technology, “Depending on the purpose, the value of ? can be approximated as 3.” When criticized, the ministry argues that, after all, the number is an approximation whether it is 3.14 or 3, and the important part is to accuately teach the concept of the ratio of a circle’s circumference to its diameter.
Because of the so-called pressure-free education, the approximation of ? became 3. Instead of pressuring students to learn challenging material, pressure-free education focuses on making sure the necessary concepts are taught. It respects students’ creativity, and helps students develop the ability to solve problems. The textbooks have become thinner, and the class hours been reduced to 70 percent of what they used to be.
The relaxed education was welcomed at first, but today, it is criticized as responsible for the overall deterioration of scholastic abilities.
In an academic achievement survey by the Organization of Economic Cooperation and Development member countries in 2004, Japanese students were rated as mediocre. Prime Minister Shinzo Abe is considering abolishing the pressure-free education, saying that emphasizing a relaxed environment made students neglect academics.
Unlike Japanese students, Koreans students are studying too hard. Students often take after-school classes as well as private lessons, and it has become widely popular to learn ahead of the current grade, for instance, studying the high school curriculum while still in middle school. Such learning makes students focus on memorizing material. Some students memorize model essays for writing class, whose original purpose is to develop comprehensive thinking and logic. It is such a waste of resources for a student to stay up all night memorizing knowledge that he will forget after the exam. The spirit of pressure-free education might be needed in today’s Korean education.