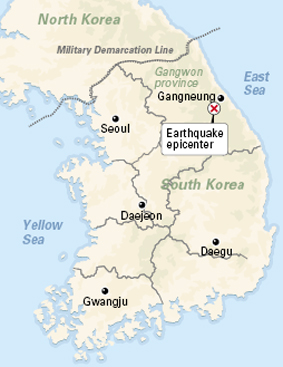 PYEONGCHANG, Gangwon ― An earthquake measuring 4.8 on the Richter scale rattled nerves and crockery across most of the nation Saturday night. The epicenter, the Korean Meteorological Administration said, was in a valley 23 kilometers west of Gangneung, Gangwon province.


The earth moved at 8:56 p.m. on Saturday, followed by three aftershocks of much lesser intensity - about 2.0, according to the weather administration. It was the eighth-strongest quake in Korea since 1978, when data were first recorded.
People in Gangneung and here were the most heavily jolted, but in the eastern suburbs of Seoul, apartment buildings shuddered and sliding doors rattled for about 5 seconds.
No injuries or property damage were reported; the Energy Ministry said yesterday that there was no damage to power plants, electrical transmission lines or gas or oil facilities. The Science Ministry said it had quickly ordered safety checks at a nuclear power complex in Uljin, North Gyeongsang province, the plants closest to the quake’s epicenter.
Power production there was not affected, the ministry added. It noted that the plants are designed to withstand any earthquake up to about 6.5 on the scale, or more than two and a half times more powerful than Saturday’s event. 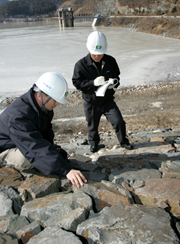 
The only damage was to people’s nerves. In Pyeongchang, a hard-working government official said, “While I was working at my office on the third floor, the building suddenly began to shake and desks were trembling. I grabbed them but the shaking did not stop. It was scary,” he said.
Pyeongchang is bidding to host the 2014 Winter Olympics. An e-mail statement from Bang Jae-heung, the head of the bid committee, said there was no damage to infrastructure in the area. A team from the International Olympic Committee will conduct an inspection of facilities in the area on Feb. 14-17.