Sensitivity is a strength

Sensitivity is a strength 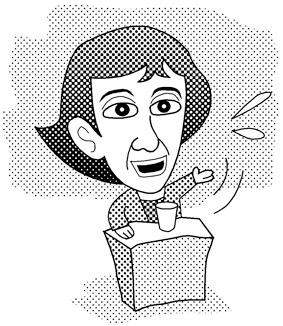 Wu Yi and Carla Hills ― these women have left their mark in modern diplomatic history, creating a stir through their boldness and doggedness. During intellectual property disputes between the United States and China in the early 1990s, the willpower demonstrated by these women was fascinating.


Ms. Hills, who was the United States Trade Representative, took aim at China’s illegal duplication practices, saying, “I’m here to negotiate with thieves.” Wu Yi, who was the Chinese deputy minister of foreign economic relations and trade, said, “We’re here to negotiate with robbers who plundered Chinese relics in the past.” She inherited the nickname “Iron Lady of China,” (from “Analyzing Chinese Authority” by Yun Duckno.) After becoming vice-premier, she gained attention when she cancelled ― at the last moment ― a meeting with Japanese Prime Minister Junichiro Koizumi. Something had perturbed her. She left an indelible mark during negotiations to open the Korean rice market during the early 1990s.
There are few female negotiators in the world comparable to these two tough women. Recently, the sensitivity of women has become an effective tool, as negotiations switch from all-or-nothing, zero-sum type negotiations to “consolidated and compound negotiations,” where all the players share profits by enlarging the pie (“Women Don’t Ask: Negotiation and the Gender Divide” by Linda Babcock). Korea, however, has a long way to go when looking at the line of female U.S. trade representatives.
The chief U.S. negotiator for the U.S.-Korea free trade agreement, Wendy Cutler, told female students majoring in international studies, “Women can be better negotiators.” She said women are better listeners and prepare more thoroughly for negotiation, which makes sense, considering this trait is not only applicable to those wanting to work in foreign service. LN means “everything in life is negotiation,” whether it means choosing a spouse or an occupation; buying a home; or even when persuading a child to sleep. The term “negotiation” has broader implications, implying business transactions, bargaining and compromise.
In organizing events outside of the negotiations, Ms. Cutler’s style is different from Carla Hills’ no-nonsense approach.
When viewing the picture of Ms. Cutler mixing with women students of the opposing country in the battlefield where bitter FTA negotiations are taking place, one cannot help but think she is employing masterful negotiating techniques.