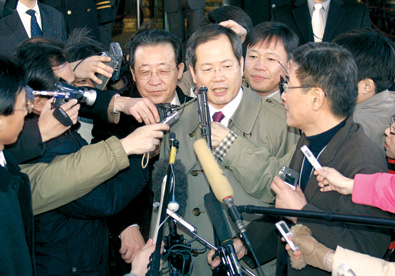 North Korea’s nuclear negotiator sounded positively giddy in remarks yesterday about recent negotiations with the United States.
“Everything can change,” said Kim Gye-gwan, North Korea’s vice foreign minister and the chief negotiator at the six-nation nuclear talks.
He was speaking to reporters after meeting his South Korean counterpart, Chun Yung-woo, in Beijing.
Asked if his earlier meeting with Christopher Hill of the United States in Berlin last week resulted in any progress on freeing frozen North Korean assets at a Macao bank, Mr. Kim told reporters smugly, “Wait and you will see.”
Mr. Kim said he was satisfied with the outcome of the Berlin meeting. He said he had seen “positive” changes in the U.S. attitude.
After the U.S. government complained publicly about alleged North Korean illicit financial activities, Banco Delta Asia in Macao froze the communist regime’s money there, about $24 million.
Blaming Washington for the sanctions, Pyongyang has refused to discuss the ending of its nuclear arms program unless the funds are freed.
North Korea softened its tone after a series of bilateral contacts with nuclear envoys of China, the United States and South Korea in Berlin and Beijing, spurring hopes for a breakthrough in the next round of the six-nation talks despite several earlier false dawns.
Mr. Chun said yesterday after meeting with Mr. Kim that the North was ready to set a date for resuming the talks. “After China is informed of the date, China will make an official announcement,” Mr. Chun said. “The date will be decided in a few days.”
Mr. Chun said he and Mr. Kim discussed what North Korea should do as its “down payment” on a nuclear disarmament program and what kind of aid the other five participants in the talks were prepared to offer North Korea.
He refused to disclose what those offers might be.
The last session of the nuclear talks took place in December after a 13-month pause, but ended inconclusively.