Get your fishy kicks on National Road 7

Get your fishy kicks on National Road 7 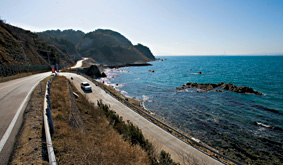 It was just what a lone winter traveler would choose over a bothersome partner: A dusty old CD from the folk band Pureun Haneul (Blue Sky) with Yoo Yeong-seok crooning his best number, “Winter Sea.” 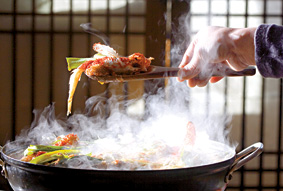 
“Let us go to the [east] sea, let us open our hearts wide, feeling the breeze, let me share your sadness,” Yoo sang as my car flew out of Seoul heading east, toward Gangneung.
The song says it all. The winter sea can be a cure for winter blues and broken hearts. This winter traveler thought the drive along National Road No. 7, down the east coast, would be the perfect backdrop for the song. It had the chilly wind to turn noses pink, the furious waves, the magnificent blue skies, and, of course, the best seafood to fill up a lonely stomach.
The harbors around Sokcho and Yangyang on the far north side of the highway were at the final stage of the sailfin sandfish catch. Known as doro-muk in Korean, the 26 centimeter long (10 inch) silver creature swims near the shore in the winter time to lay eggs, providing the local fishermen with a nice season of game fishing. The egg-filled doro-muk is slowly roasted over fire, until the surface gleams gold and the meat turns soft and chewy.
It’s actually quite complicated and sad how this fish earned its name. Doro-muk is often misused in idiomatic Korean to mean “back to zero and worth nothing.” The fish originally had the name mok-eo, but it used to be called muk (nothing) during the Joseon dynasty when it was regarded as a plebian dish. Then, in the late 16th century, King Seonjo had his first taste of the fish during wartime and renamed it eun-eo (literally meaning silver fish) because he thought it was too good to be called a “lowly muk.” But it was a mere whim of the king’s. After the war he tasted it again, but the taste was not like the first. Apparently disappointed, he ordered that “the fish be called doro (again) muk.” 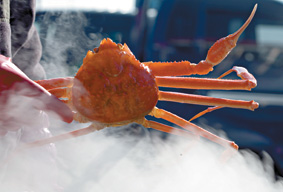 
Doro-muk kept true to the fate the king had decreed. It was the one of the most common fish on the northeastern shore ― so common that a popular saying said that even a dog would not take a bite. But in 1970s it became known as being efficacious for those suffering from the aftermath of the atomic bombing in Hiroshima, and its fate changed again. Every sandfish that was caught was exported to Japan. In Korea, the fish turned into a scarce - and expensive - item. A few years ago word got around that they fish could also help prevent leukemia. So a considerable amount of doro-muk still crosses the waters to Japan.
According to the National Fisheries Research & Development Institute, the rise of the ocean temperature has been causing a drop in the number of sandfish caught off the eastern coast each year. In the 1970s, 25,000 ton was the annual haul. Now just 5,000 ton is much more likely.
Doro-muk is usually cooked in jjigae, or stew, largely because they do not have much flavor. Slice up some radish in generous chunks and boil them in a pot. With a little seasoning, add the doro-muk meat. Don’t boil for too long; the meat is too soft and it cooks quickly. Doro-muk stew is considered a good choice for those who want to stimulate their appetite and for hangovers. The fish is also roasted over gridirons on briquette fires. Sprinkle coarse salt over the filets. Wait until one side has turned gold before flipping once. Flipping too often will only mess up the shape because the meat is flaky. The doro-muk barbeque usually tastes better (or it seems) when it is eaten from a vendor tent rather than a restaurant. 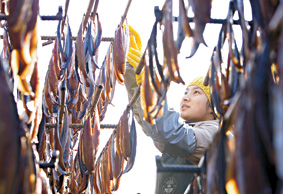 
After five or six hours of driving south on National Road No. 7, I was still having fun. Every time my car took a turn around the corner of a valley, another winter beach and a hamlet with an amazing vista popped into view. I stopped the car occasionally to look down from the small observatories that are stationed sparsely along the highway. A cup of instant coffee mix from a vending machine was almost heaven.
I passed through Samcheok in Gangwon province, entered North Gyeongsang province and arrived in Uljin. There awaited Hupo and Jukbyeon harbors. The former had originally been the leader in mackerel fishing and the latter is famous for king and queen crabs. My first stop-over was Jukbyeon harbor, only 10 minutes away from Uljin downtown.
It was 6 a.m. and the joint market was bustling with action. Someone blew a loud whistle and a crowd rushed to the docks where boats were coming in. Fishermen lowered down cages from the boats and spilled their contents. They were crabs, at least 50 centimeters in length, thousands of them, all sprawled around the dock.
“Look, here. There are 773 [crabs]. No, this easily makes up 750 in a box. This is good stuff today,” an auctioneer yelled out and the brokers each took out a piece of chalk. They started to scribble down the numbers on a small wooden tablet and then held it up high. The auctioneer only calls out the highest price.
“3,750 won ($4) per crab? Sold!”
What? 3,750 won? That’s too cheap for a king crab. But that was how it was, but only for the brokers. Even the restaurant owners around Jukbyeong harbor had to buy their crabs from these middlemen. The wide-eyed onlookers, like myself, could only sit quietly by the fire and watch the cheap sales with envy.
But an official from Uljin county government said tourists don’t need to be too disappointed. There is a limited auction event for them every Saturday.
“On Hupo harbor, there is an auction for ordinary people for two hours starting at 8 a.m.,” said Cho Tae-seok, a fishery chief clerk at the county. “Make a reservation at the county’s fishery cooperative [054-787-1337] to participate.”
Soon another loud whistle blew from down the dock. Again, the crowd of brokers ran toward the sound. This time the boats brought octopus, flounders and squid.
Sushi houses are lined along Jukbyeon harbor selling a whole cooked crab for 10,000 won each. I ordered a fat crab. It arrived steaming on a plate. I cut a leg with a pair of scissors and took a bite. It was chewy, sweet and definitely fresh. How could anyone not like crabs? Next to me a group of people finished their meal and took turns pouring leftover soju on their fingers, rubbing them together before they left the table. I asked the restaurant owner why.


“The smell does not go away even after you wash them with soap. But soju makes it go!” she explained. So I tried. It did.
Question: When and where did Koreans first start eating crabs? The answer came from a small hamlet called Geoil-ri in Uljin, where a monument commemorating the “Uljin King Crab” stands. On the monument, there are passages about crabs from the Donggukyeojiseungnam, or the National Survey of Korean Geography, the 50 collections of original geography books from 15th century Korea.
“My ancestors caught crabs in this village. We had no rice paddies around here, but this town was rich back then because of crabs,” Bang Myeong-rok, 71, a Geoil-ri resident, recalled. He said people sailed far out to the sea “up to where the horizon and the ocean met” in sailboats. There was approximately 23 square kilometers of open sea where most of the crabs were caught. He said a Korean expression to describe a noisy situation derived from Geoil-ri.
“People would say ‘What’s all the noise? Did the crab boat arrive in Geoil-ri?” Mr. Bang said smiling.
For Kim Gyeong-suk, 39, living in Seoul, winter is his favorite season because it’s the time for guamegi, a herrings or a mackerel dish, from his hometown in North Gyeongsang province.
“When the wind turns chilly and there’s a hint of snow in the air, you long to bite into a guamegi, rolled in seaweed. With a gulp of soju, of course,” he said. “Only from guamegi can one feel the Pohang seashores, never from other fish.” If I can rephrase that, it should be “smell” not “feel.” Guamegi is a herring or a mackerel that has been slowly dried and then hardened by repeatedly freezing it and thawing it again. What might be a “fishy smell” for first-timers, say guamegi lovers, becomes the “scent of home,” once you get used to the taste.
At the southern end of National Road No. 7 is the harbor city of Guryongpo. Even in the coldest month of the year, the wind here is not too chilly. The residents explain the cold, dry air that crosses the mountain ranges meets the warm sea breeze when it arrives here.
“The taste of the guamegi originates from the wind. When the wind’s temperature difference is big, guamegi turns crisps and crumbles. If the wind is too strong, the skin dries up and the meat spoils,” said Ahn Gu-jin, the head of Sanho Marine Products in Guryongpo. “That’s what we call guamegi ‘son of the wind.’”


Mr. Ahn explained that the wind was the reason why 80 percent of guamegi is produced in Guryrongpo. Guamegi is considered one of the best winter delicacies ― if you can stand the eccentric smell, that is.
Guamegi used to be made from herrings. Wives would hang a fish high on a kitchen window during the winter and wait until the fish turned into a guamegi. But herrings became rare and mackerels took their place. Mackerels for making guamegi are not all from the sea near Pohang, however. A lot of them are from the deep sea in the northern Pacific Ocean.
“Mackerels caught in the East Sea during the winter are usually small,” said Mr. Ahn. “There is not enough meat and the guamegi does not taste as good. That’s why we used the mackerels from the deeper ocean.”
A strange phenomenon here is that despite its fame as the home of the guamegi, there are not many restaurants that specialize in the dish across Guryongpo.
“Guryongpo is a town that produces guamegi. Its probably a bit hard for tourists to buy them,” said Kim Hyeon-gyeong, 34, a housewife who came to live here after marrying her husband. “This place is like a wholesale market for guamegi.”
I followed her to a sushi restaurant. She ordered a plate of sushi and a bottle of soju for me.
“But I wanted to have guamegi,” I mumbled, feeling disappointed. Ms. Kim did not say anything. Instead, she smiled.
Soon a plate filled with guamegi, lettuce, seaweed, green onion, peppers, garlic and spicy pepper paste was served.
“In Guryongpo, guamegi is a side dish that always follows every meal,” said Mun Sun-nam, the restaurant owner. “In the winter time, even the galbi restaurants serve guamegi at no extra charge.”