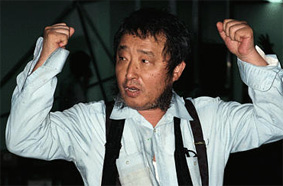 An exhibition commemorating the one-year anniversary of the death of Paik Nam-june, a Korean-American video artist and performer, titled “Paik Nam-june and Fluxus Friends” will be held at Gallery SSAMZiE from Jan. 29 to March 18.


Throughout his artistic life, Mr. Paik explored the relationship between media, culture and art. Born in Seoul, the artist went abroad to Japan to the University of Tokyo majoring in aesthetics and to Europe in 1956 to study music and philosophy at the University of Munich and at the Music Conservatory of Freiburg. During the early 1960s, he became involved in the Fluxus movement, which included composer John Cage, artists Yoko Ono and Joseph Beuys, and other prominent cultural figures of the time. Mr. Paik came into the limelight with his performances and video monitor installations. He died on Jan. 29, 2006 at the age of 74.
The exhibition will be in two parts ― one introducing Paik Nam-june and his artistic life and another exhibiting the works of the members of the Fluxus movement. There will be paintings, drawings, video installations and photographs by Mr. Paik, including footage of his performances during the 1960s and 1970s in Europe and Japan. Key video works, including his television screenplay, “Good Morning, Mr. Orwell” (which was based on his novel of the same title), “Wrap Around the World” and “Bye Bye Mr. Kipling” will be featured. Works by Fluxus members ― including Charlotte Moorman, Mr. Cage, Mr. Beuys, Dick Higgins, Ms. Ono and Jon Hendricks ― along with photographs and footage of the 1992 Seoul Fluxus Festival, will be on display.
In addition to the main exhibition, there will be video installations, paintings and drawings done by 50 children from the Seoul National University High School and Let’s Art Center, made to commemorate Mr. Paik. 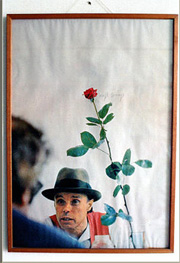 An ArtNews magazine cover from 1978 featuring Joseph Beuys will be exhibited. Provided by Gallery SSAMZiE


Child docents will give tours of this exhibition.
A hanbok (traditional Korean clothing) exhibition with works by Lee Ji-young will also be featured, as Mr. Paik frequently used the hanbok motif.
During the opening next Monday, Kim Geum-hwa, an Intangible Cultural Property, will perform a gut, a Korean shamanic exorcism.
During a gut, a woman dances and plays percussion instruments to drive out evil spirits. Mr. Paik often referred to gut during his lifetime.