Flair meets beauty when age shares a stage with youth

Flair meets beauty when age shares a stage with youth 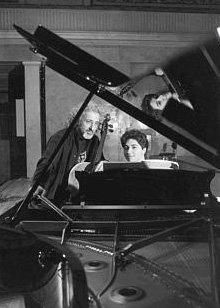 Conductor Zubin Mehta once called a performance by Mischa Maisky “sensible and thought through” without being artificial. Legendary cellist Mstislav Rostropovich praised Maisky’s harmony of lyrical emotion, his intense passion and his blinding technique.


Three years after his sold-out concert here, Maisky is going to perform in Korea again, with pianist Sergio Daniel Tiempo, in Ulsan on Jan. 30, Daejeon on Feb. 1 and in Seoul on Feb. 2.
Born in Riga, Latvia in 1948, Maisky attended the Children’s Music School and Conservatory, and in 1962, entered the Leningrad Conservatory. His debut three years later earned him the nickname of “Rostropovich of the Future.” In 1966, he won the International Tchaikovsky Competition in Moscow, the sole prizewinner who was not one of Rostropovich’s pupils. Impressed with his performance, Rostropovich asked Maisky to study under him at the Moscow Conservatory.
In a change of fortune, Maisky was imprisoned in a labor camp near Gorky for 18 months beginning in 1970 on charges of treason. In 1973, he emigrated to Israel. He made a comeback, winning the Gaspar Cassado International Cello Competition in Florence in 1973.
Sergio Daniel Tiempo was born in Venezuela in 1972. Tiempo has quickly risen to international prominence since making his debut at age 14 in the “Great Pianists” series at the Amsterdam Concertgebouw in 1986. He was invited to perform at the Schleswig-Holstein Music Festival and the Verbier Festival, where he played with Maisky. Tiempo toured Korea with Chang Ha-na in November last year. Maisky and Tiempo have performed together a number of times, including a duo recital at the Salzburg Festival. They also recorded Mendelssohn’s Cello Sonatas together.
The program consists of Beethoven 7 Variations from Mozart’s “Magic Flute” WoO. 46, Schubert Sonata for Cello & Piano in a-minor “Arpeggione,” Rachmaninov Elegie Op.3-1 and Rachmaninov Sonata for Cello & Piano in G minor, Op. 19.
Mischa Maisky’s cello recital at the Seoul Arts Center begins at 8 p.m. on Feb. 2. Ticket prices are 30,000 won ($32) to 100,000 won.