[Movie Review]‘Click’ if you want, but hold your nose

[Movie Review]‘Click’ if you want, but hold your nose 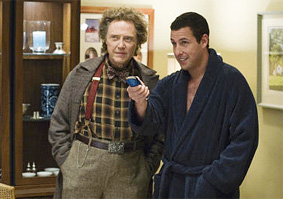 Adam Sandler’s comedy is silly, immature, vengeful, chauvanistic, scatological and unsophisticated. Say what you want about him. It’s all true.
And it all holds steady in his latest effort, “Click.” There are fart jokes, lame one-liners (and lame running gags), an excess of giant-breasted women, fat suits and mean, violent jokes on a little kid.


Yet, in this script there’s also an honest family morality play in the tradition of “Groundhog Day” and “It’s a Wonderful Life.” When he’s not shouting or farting, Sandler executes these moments in a genuinely moving fashion.
In “Click” Sandler is Michael Newman, a lowly architect crushed under the heel of a nightmare boss (David Hasselhoff), typically prevented from spending time with his wife Donna (Kate Beckinsale) and their two kids.
The gimmick is a universal remote he finds in the “Beyond” section of a Bed, Bath & Beyond store that controls not just the TV and the garage door but life itself.
This thing is (perhaps insultingly) depicted to be every man’s dream ― “volume” turns down the barking dog, “mute” combined with “picture-in-picture” lets him watch the game instead of listening to the whining of his wife’s busty best friend, and “fast forward” skips his mind through work, fights, showers, and even (unintentionally) sex. During these periods his body stays on “auto-pilot” ― minimally functional if socially unappealing.
Unfortunately the remote takes a cue from Tivo and automatically skips anything that’s been skipped in the past ― so when Michael skips a year to get a promotion, his life starts flashing by out of control. The sales clerk who gives Newman the remote turns out to be the angel of death. You see where this is going.
As one might expect, most of the humor in “Click” is, well, just not funny. The idea of a “main menu,” as though life were a DVD, is cute, but the “commentary” by James Earl Jones isn’t as funny as it sounds. (After all, isn’t the director supposed to do the commentary?) Sandler’s odd noises and the workplace gags are just uninspiring at this point.
There is one place the film is quite funny ― the slapstick. Michael’s remote lets him pause the world and take out his frustrations on his adversaries without anyone knowing. When his boss reneges on a promise to promote him, he thwacks his face back and forth before hitting “play” innocently. The gag’s visual effect is just right ― the head moves, but there’s no momentum or recoil, as you might expect if time were stopped.
If the movie has a strong suit, though, it’s the family story. As Michael zaps forward, he finds his wife has left him for another man, he’s missed his daughter’s sullen adolescence and his son is getting married. While he’s on autopilot, his father dies.
In the movie’s final scene, Michael is lying on his deathbed and his son cancels his honeymoon to work. Michael feels he must stumble out to warn him that “family comes first.” It’s an obvious message, but as Michael speaks his last words on the asphalt in the rain, it’s almost enough to make up for all the poop jokes.
Almost.