What kind of jackass likes to sunbathe in a tuxedo?

What kind of jackass likes to sunbathe in a tuxedo? 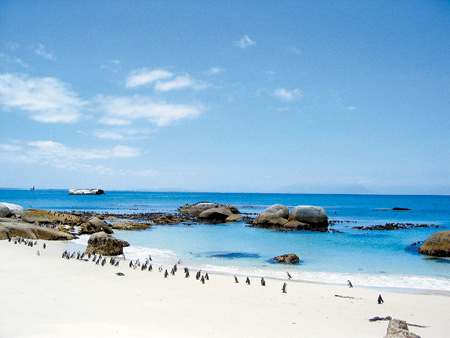 African Penguins tottering around at Foxy Beach under the scorching sun. The beach has one of the few penguin colonies in South Africa.By Park Sung-ha

How to get to Cape Town:
There is no direct flight from Seoul. Either transfer in Bangkok via Thai Airways or in Hong Kong via South African Airways to Johannesburg. Make sure you have ample time for the transfer. From Johannesburg to Cape Town, contact budget domestic airlines, such as Kulula (www.kulula.com), 1time (www.1time.co.za) and Mango (www.flymango.com). Sometimes, British Airways (www.ba.com) offers better deals as does South African Airways (www.flysaa.com).
How to get to Boulders:
Taxi is the best and safest public transportation. Taxi fares can be negotiated if you’re traveling a long distance to places like Boulders . I paid 600 rand ($84) from The Backpack to the beach for round trip. One way trip costs 400 rands.
There is also a metro commuter train to Simon’s Town, near Boulders. It’s cheap, but staff at my backpackers’ hostel said it was not recommended.
To enter both the Penguin Colony and Boulders Beach: Adults must pay 25 rand for entrance while a child pays 5 rand.
Accommodation:
The Backpack (www.backpackers.co.za) 72 New Church St, Tamboerskloof; 021-423-4530, from 95 rands.
Cape Town Backpackers (www.capetownbackpackers.com) 81 New Church St; 021-426-0200, from 90 rands.


Brief fact file
Name: African penguin, Jackass penguin, Cape penguin, or Black-footed penguin
Height: about 50 centimeters (1.6 feet) on average
Weight: 2.1 to 3.7 kilograms (4.6 to 8.2 pounds)
World population: about 179,000
Population in Boulders: Two breeding pairs arrived in the 1980s and there are now around 3,000.
Breeding season: all year, but the main season starts in February
Age at first breeding: usually 4 years.
Eggs: one or two eggs, usually two, with a 40 day incubation period.
Lifespan: average 10 to 11 years. Maximum 24 years.
Food: squid and shoal fish such as anchovy and pilchards
Swimming speed: 7 kilometers per hour
Conservation status: numbers are decreasing by about 2 percent per year.
South African Red Data Book status: vulnerable
Distinguishing adults and juveniles: Juveniles are entirely blue grey and lack the white face markings and black breast-band of the adults
Distinguishing adult males and females: very difficult. Males are larger and have larger bills; these differences can usually be seen only when a pair is together.
Source: “The African Penguin ― a natural history” by Phil Hockey.