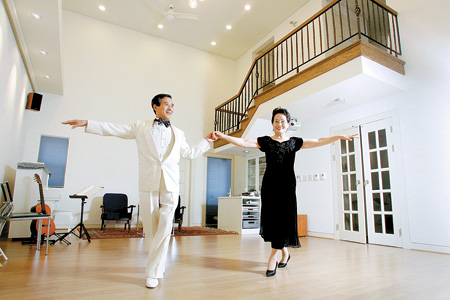 Kim Myeong-jung and Mun Dong-gyu dancing in the ballroom at their house in Gwangju, Gyeonggi province. By Kang Uk-hyun

An air of tension suffused the room as the couple arched their chests and stepped away from each other. The “Tango des Roses” began to play. Kim Myeong-jung looked solemn and determined. As the music reached its climax his feet moved with a staccato tempo. He snapped, glided and then twisted his partner’s waist to signal a turn toward the opposite side of the room.
Then, suddenly, Mun Dong-gyu, his wife, slipped and a smile escaped her lips. The couple paused to give each other an awkward look.

“You are not supposed to laugh when you dance the tango,” she said. “That’s the glamor of it.”
Mr. Kim, who is a dentist, agreed.
“You have to look imperious in the tango,” he said.
The couple was dressed to kill, he in a white tuxedo, she in an elegant black ballroom gown, the same dress she wore to their anniversary ball last fall.
That ball, which was organised by members of the Para Club, a group comprised of married couples devoted to ballroom dancing, was the highlight of their 12-year dancing history. Almost 200 people attended the ball to congratulate the couple, who were celebrating their 35th wedding anniversary.
Mr. Kim and his wife performed the “Anniversary Song,” a classic waltz by Pat Boone. They had undergone months of intensive training from a professional instructor who had been a student of John Wood, the famous British ballroom dancer. The scene was a far cry from the days, not so long ago, when Western style “dirty dancing,” involving continuous bodily contact, was regarded in Korea as morally offensive. 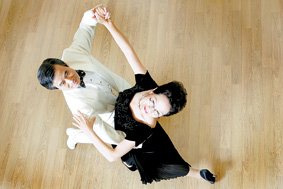 “We were still very nervous,” Ms. Mun said. “But it went quite smoothly.”
Mr. Kim, 64, took his first dancing lesson in 1994. From the beginning the sprightly dentist enjoyed himself and even limited the number of patients he took on so that he could attend evening classes.
“It was really awkward at first,” he said. “The idea of ‘ballroom dance’ is not a part of Korean culture. Now my friends tease me and say that I am a gigolo, but I have thick skin. I don’t care what they say.”
He joined the Para Club with his wife when the group was officially formed in 1994.
The rules to join are simple ― couples have to be married, amateur dancers over the age 40. Currently there are 100 couples in the group; the oldest couple is in their ’80s. The club holds balls four times a year, but the members occasionally meet at a community center to practice.
Mr. Kim and his wife, however, wanted to dispense with traveling to the center so they could devote more time to dancing. When they moved to a new house on the outskirts of Seoul they created a ballroom on the first floor to practice their steps.
“I was never fond of exercising,” Ms. Mun said. “But this is charming.”
Mr. Kim agreed.
“But it gets harder the more you get into it,” he said. “It’s not like playing golf, where you can just concentrate on your swing. You constantly have to be aware of your partner.”
Dancing has not always been an accepted form of entertainment in Korea. It was not until the end of the 19th century that the idea was first adopted by the royal circle, who learned their steps from the Russian legation.
The earliest record of a ballroom dance on the peninsula dates back to 1890, when Lee Ha-young, an English interpreter for King Kojong and a future a member of the American legation, demonstrated the Boston Waltz at a public ball.
Other records show that Koreans who returned from studying in Japan and Russia held occasional dance showcases at a community center that is now the Seoul YMCA. But contact dancing was largely considered to be a secret form of entertainment for those in high society, to be practiced in salons hosted by gisaeng, or Korean geisha.
Dance culture became popular among the general public for the first time when clubs and dance halls for American troops were set up after the Korean War. In 1959 the first national ballroom competition was held in Korea, at Jangchung Stadium, marking a new age for dancing. Many Koreans began to dance up close and personal for the first time.
This initial heyday did not last. The popular novel “Liberal Wife” ― which was made into a film ― told the story of a professor’s wife engaged in an extramarital affair with a younger man that began after she started to ballroom dance. The book fostered a negative view of contact dancing, depicting it as a gateway to corruption and immorality.


The military government led by Park Chung-Hee enforced strict regulations for dance clubs, seeing ballroom dance culture as a barrier to the nation’s economic development and an affront to its morals. Then, in the mid ’80s, newspapers ran a series of stories about married women who had been caught having affairs with men they had met in dance clubs. The scandal was made more extreme by the fact that their husbands were working in the Middle East on construction projects ― then the nation’s major source of economic revenue. From then on dancing was stigmatized as being “dirty” until the early ’90s.
“It was lonesome,” recalled Jang Young-hee, who was a ballroom dancer during the period. “Dance was simply not seen as healthy recreation for ordinary people.”
Ms. Jang, now 51, practiced her steps at clubs for foreigners.
Then, during the mid ’80s, she ran her own school in downtown Seoul, until a fire burned down the whole building. Later she moved to her current location in Insa-dong, where she teaches groups of retired people and middle-aged office-workers. She also has a few young students.
“Attitudes have definitely changed over the years,” she said, “I have older students complaining that they were left out of their circle of friends because they didn’t know how to dance. Dance has become a critical part of the social life of older people, even in rural areas. It’s a fashionable trend and one needs dancing skills to fit into their society.”
In fact a new term has been introduced to refer to the growing crowd who are flocking to dance halls. They are called “Generation G,” a name that refers to “Great people who have Grey hair and live in a Golden age with Graceful and Gentle thoughts.”
“Dance changes your perception quite a bit,” said Mr. Kim. “In the past my idea of entertainment was the same as other Korean men ― namely, drinking until I dropped. Now I don’t think that is the answer for every year-end party. Instead I listen to good music and dance .”

Places to learn the dancing arts