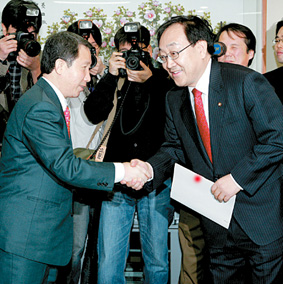 Kim Geun-tae, left, Uri’s chairman, seemed unfazed by the resignation of Lee Key-ahn from the party as Mr. Lee bid farewell yesterday. A reunion under a new political tent is a possibility for the two politicians. [YONHAP]

The Uri Party has lost two more legislators - one Tuesday and one yesterday - after Im Jong-in picked up his briefcase and left to begin the parade to the door on Monday.


The faction-ridden party appears likely to lose some members to both the more conservative and other liberal or left-wing parties, according to Rhee Mok-hee, one of its senior members. “A minority will remain in the Uri,” Mr. Rhee predicted.
That disintegration of a party after less than four years is an object of fascination to political analysts pondering the prospects for the Uri convention scheduled for Feb. 14.
At the minimum, it would appear to be a tough decision as to how large a conference room the party should reserve for the meeting.
Late Tuesday evening, Lee Kye-ahn announced his departure, and handed his resignation yesterday to the party’s chairman, Kim Geun-tae. Yesterday, Choi Jae-cheon followed suit. The two men said they would remain independent of any political party for the time being.
Their departures were more interesting that that of Mr. Im, the first to go, because they are both allied with Chun Jung-bae, once a confidant and justice minister for President Roh Moo-hyun but now one of the leaders of the charge to form a new party despite Mr. Roh’s complaints.
Mr. Chun was one of the founding fathers of the party with Mr. Roh, but has hinted strongly at moving on himself to form a new group that could distance itself from Uri’s woes.
When he announced his resignation, Mr. Lee said, “We can do nothing under the labels of ‘Uri Party’ and ‘President Roh Moo-hyun.’”
Mr. Choi issued a statement yesterday that said it was time to “start over again.” 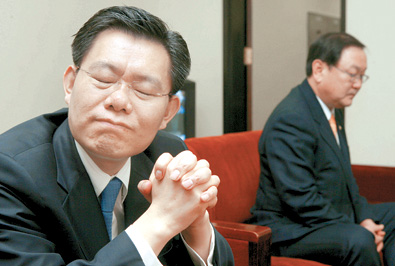 
With the defections, Uri now has 136 seats, a plurality in the legislature, followed by the conservative Grand National Party’s 127.
Some of the potential defectors, if Assembly gossip is at all reliable, are more interested in joining an established party than taking a chance on a fledgling group.
The Grand National Party said it would welcome Uri members of a more conservative bend, and the Democratic Party, Kim Dae-jung’s now much-diminished legacy, said it had received at least one feeler from an Uri member about switching allegiance there.
The Uri dissidents hope to organize a party with a firm base in Korea’s southwest, where voters have often cast 98 percent of their ballots for their favorite sons, including Kim Dae-jung. Other efforts were also reported to form a party firmly in the political center.