Beginner’s guide to Korea skates across the surface

Beginner’s guide to Korea skates across the surface 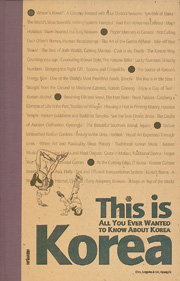 Choi Jung-hwa and Lim Hyang-ok have set a lofty goal for themselves in their new book, “This is Korea.” Sandwiched in between those words in fine print is an even loftier aspiration: The subtitle is “All You Ever Wanted to Know About Korea.”


That’s a big job for a 198-page volume, and in fact it’s a primer for people who still wonder whether Korea is somewhere in Southeast Asia or a part of China. As the authors said in a press release accompanying the release of the book, they are somewhat distressed by the lack of knowledge about this country.
Both have solid international credentials; they are both simultaneous interpreters (Ms. Choi in French and Ms. Lim in English) and professors at the Hanguk University of Foreign Studies. Ms. Choi’s thoughts about the faulty perceptions of Korea led her to open the Corea Image Communications Institute in 2003; Ms. Lim is a director at the institute.
I confess to having a soft spot in my heart for Choi Jong-hwa, a petite, bubbly dynamo with a megawatt smile who is also a thoughtful and diplomatic advocate for Korea. In the mid-1990s, she co-authored a book called “The Honorable Barbarian,” a series of vignettes that explored the problems of adjusting to a new culture. Ms. Choi recalled her experiences as a young woman studying in France and her co-author, a young American woman, described her first exposure to life in Korea.
Perhaps unintentionally, that book was also extremely interesting because of the contrast between Ms. Choi’s humorously self-deprecating description of what she called her own stumbles and fumbles in an unfamiliar culture and her co-author’s much more direct complaints about what she saw as shortcomings in the Korean millieu. I confess I drew some politically incorrect conclusions.
The new volume is a series of short essays that struck me as a mix of logical groupings and eclectic selections, the latter explained partly, perhaps, by the authors’ experiences in handling questions about their homeland. It’s divided into sections on basic information about Korea, Korean daily life, food, sightseeing, art and Korea’s tumultuous modernization, a work still very much in progress.
There is, indeed, a lot of interesting information in this book, not only for a newcomer to Korea but also for foreign residents who have lived here for some time. But it is a pastiche, and strikes me as being more a book to pick up during idle moments for a quick perusal of random topics than a book to be read and digested. That’s certainly not a flaw, but this book should probably not be the only volume you read on the subject.
Especially for someone who has absorbed the rudiments of navigating through the Korean scene, there is still a need for some additional data to understand the things that make Koreans tick. Other books can provide more details on things like the Korean reckoning of seasons, its history and the odd (to Westerners) system of counting.
I wish the page and a half on Korean history had been expanded somewhat to include references to Korean kingdoms of past eras. That would have helped newcomers understand why Chinese interpretations of the history of a 1,000-year-old kingdom could ruffle Sino-Korean diplomatic relations in the 21st century.
The book may be encapsulated as an abbreviated work similar to Paul Crane’s “Korean Patterns,” which I picked up during my first stay in Korea as a young GI many years ago. Crane’s book, while sympathetic, was occasionally pointed in its descriptions of Korean society in the 1960s; Ms. Choi and Ms. Lim at times seem to veer in the other direction in describing modern Korea. There are references, for example, to Korea as “a country blessed with four distinct seasons.” Indeed, that’s true, but it’s hardly unique. There’s the obligatory table of high-speed Internet use in several countries with Korea at the top and another showing that Korea leads the world in the turnover of cell phones.
Perhaps Ms. Choi’s familiarity with France, I thought amusedly, sparked the inclusion of “Sarang haeyo” (I love you) in a list of 12 words and phrases the authors offer as “survival Korean.” Indeed.
Well worth reading, this book may also serve as a useful gift for family members back home.