Korean literature reaches out to far away places

Korean literature reaches out to far away places 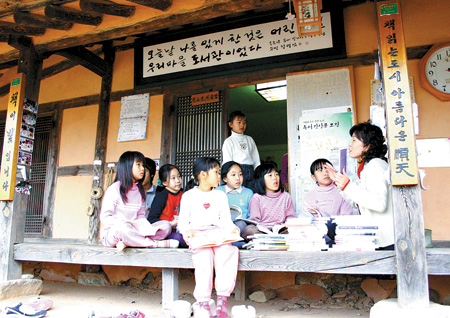 children outside the library in Nakan. [JoongAng Ilbo]

The Korean Literature and Arts Committee has launched a project to spread Korean literature more widely, especially to people who are otherwise isolated from the mainstream of society. It has created the “Spread Korean Literature” committee with a grant of government financial support.
The project will encourage more people to read Korean literature. It has been developing as a pilot scheme for three years, funded by government investment. The purpose of the government’s funding has been to revitalize Korean literature and promote its spread to areas where people do not have much opportunity to read books.
The money made available has also been earmarked to enhance literary creativity and imagination, to ease cultural polarization, and to give lottery funds back to society by promoting the public good. To invest in Korean literature, the government raised 5.2 billion won through the Lotto lottery fund. The money will be used to encourage writers to produce new work, to invest in buying Korean literature and distribute it to libraries, hospitals and prisons. There are many people who appreciate the program, such as children living in remote areas, patients in hospitals and soldiers serving their country overseas.
One remote area that has benefitted from the project is Nakan, a traditional folk village in South Jeolla. It has about 100 houses and a small library housed in a thatched cottage. The village library has about 1,400 books, 775 of which were purchased with the help of government funds given to the “Spread Korean Literature” campaign. On the readers’ list at the library are 104 children and adults.
Among the readers, Kim Young-Woo, 11, is the most frequent user. He reads 4 books a week on average and last year he read 212 books from the library. Other readers normally borrow around 50 books a year. Bong Mi-Yeon, the librarian in Nakan, said, “During the vacation, children come to the library everyday. Adult readers also visit often. The government’s support gives these benefits to the people of Nakan so they can read more books. Within two years of the government’s investment we saw a rise in literacy.”
There is a Web site for the “Spread Korea Literature” program, www.for-munhak.or.kr. It carries many comments made in appreciation of the government’s investment. Park Chan-wook, a marine, posted a comment saying that he appreciated the government’s support and the good books sent to his destroyer.
Many thank you cards were sent to the “Spread Korean Literature” committee from all over the country, including Gwangju prison, the senior welfare center in Anseong, Gyeonggi province, and Sion caring center in Iksan, North Chungcheong.
Kim Kun, a press officer for the “Spread Korea Literature” committee, said, “This program has just started to share and spread Korean literature. It will inspire the creativity of Korean writers and boost literary efforts.”