Applause rings for musicals of Paris

Applause rings for musicals of Paris 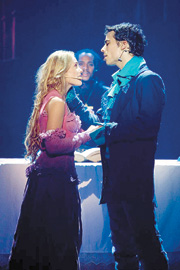 A scene from “Romeo et Juliette.”

Almost every night in January, the 3,000 seats at the Sejong Cultural Center have been filled with fans of the French musical “Romeo et Juliette.” Standing ovations abound at the end of the performances; the audience rushes forward to take cell phone photos at curtain calls.


“Korean fans’ passion provides us new energy,” said Gerard Presgurvid, the composer and producer of the musical. “I am very touched by their love.”
French musicals have not been very popular in English-speaking communities, but are unexpectedly enjoying a lot of the love Presgurvid spoke of from Korean audiences. No French musicals have been performed on New York’s Broadway, and only a few have been staged in London’s West End.
“In England and America, musical performers have to act, sing and dance and be good at all three of them,” said Jo Yong-sin, a music critic. “But French musicals separate the three factors, and audiences in English-speaking countries are unfamiliar with that performance style.” 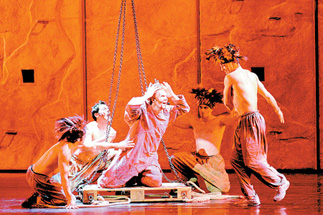 They’ve grown to love it, though. The first French production in Korea was “Notre Dame de Paris,” which opened here in January 2005. There were no dramatic stage settings or fancy costumes, but audiences loved the songs. After the Korea production ended, fans formed groups of 30 or so to travel overseas to watch productions of the musical elsewhere. With that unusual popularity, Laurent Ban, one of the musical’s performers, appeared in a solo concert in Korea last year.
The fever continued unabated here. After the success of “Notre Dame de Paris,” “Les Dix Commandments” and “Romeo et Juliette” were imported.


“Don Juan,” which was staged at the Seoul Arts Center at the end of last year, was sent to Korea as its first overseas stop outside of the French-speaking world. Korea seems to have become an important market for French musicals.
The Korean passion for French musicals is also influencing business trends. NDPK, which imported “Notre Dame de Paris,” bought the rights to stage the musical in Asia after the Korean appearance. For two years in a row, the musical was a big hit in Taiwan. The company also signed a performance deal in Singapore. “French musical companies think Korea is their bridgehead to enter the Asian market,” said Pil Jung-yeon, an NDPK manager.
Although some Koreans are giddy, a few are sour. Won Jong-won, who teaches journalism and broadcasting at Soonchunhyang University, called the French musicals’ popularity a reflection of Korean vanity in their cultural sophistication. But even critics agree that the market is dynamic, whatever the cause.