Dr. Coffee gives it all to brew a perfect cup

Dr. Coffee gives it all to brew a perfect cup 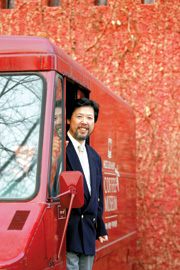 Park Jong-man on his company vehicle and, in the article, his coffee paraphernalia

T.S. Elliot might have regretted measuring his life with coffee spoons but for Park Jong-man, nothing could be better.


The businessman turned coffee guru is so dedicated to the bean that he will embark on a multi-nation trip in less than two weeks to visit coffee’s birthplace. The KBS network will join him to film a documentary.
Mr. Park was running an interior design company in 1989 when he went on a business trip to Japan and stumbled upon a Japanese coffee company named Waltz. This stumble changed his life.
“It was literally like finding a new world. I saw a coffee shop that this company, Waltz, was running and went in. In Korea at that time, coffee shops were ill-lit, smoke-filled places where people would grab the waitresses and pat their behinds. It was a shock to find an intricately decorated small cafe that was open, fresh and friendly,” he said.
After a chat, the owner of Waltz showed Mr. Park his factory.
“The old man was a different person in the factory, running around, shouting ― it was so dynamic. I was impressed that they were so concentrated on making this one product perfectly. I got sucked in,” he said.
The incident was enough to change the course of his life. He studied coffee from blending and brewing to tasting, and after getting the Japanese owner’s permission to use the name, he opened his first Waltz coffee shop in front of Hongik University in October 1989. 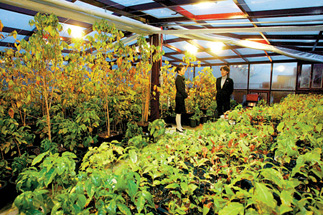 Mr. Park’s greenhouse on the top floor of his museum, which he uses to grow coffee beans. By Kim Hyeon-dong

“I wanted to start a proper, Korean-owned coffee franchise in Korea. It really started as a side job [in 1989, he was still working at the interior decorating company] but soon, the franchise was growing,” he said.
At its peak, more than 70 Waltz cafes were operating, but due in large part to his own mistakes, Mr. Park’s fortunes were to change.
“We were lacking in management, technique and business skills,” he said.
By 1996, he had closed all his outlets except a single store in Gangnam-gu, southern Seoul, which remains open.
None of this, however, succeeded in diverting Mr. Park from his determination to secure coffee’s place in Korean culture.
He even went so far as to try to raise the bean on the flatlands of Gangwon province.
Because there were no schools offering courses in Korea on the subject, Mr. Park pleaded with the professors at Gangwon University, which is known for its agriculture department, to allow him to do research about growing coffee in Korea. He eventually received a doctorate in agriculture from the university.
The effort, though, was doomed to failure. Considering coffee beans grow in tropical regions where the weather is hot, Korea does not have the appropriate climate or soil to grow the beans. Mr. Park said there are four main elements that are needed to grow coffee beans ― the right temperature, sunlight, water and soil.
“It’s quite a stupid, fruitless thing to study really,” he said, laughing aloud. “There is no money to be made in the near future. But these days, with the developments in genetics, DNA and pomology, I think it is quite possible that coffee will grow in Korea somewhere down the line.”
He mentions that in Korea, there are no places to grow beans naturally and that while Jeju Island has warm temperatures, occasional snowfalls during the winter make it impossible to grow the beans safely.
While Mr. Park may not have succeeded in growing coffee, he was able to rebuild his business.
In 1996, he moved his aspirations and dreams to Namyangju, Gyeonggi province, an hour or so away from Seoul. He started over. He renamed his company Waltz and Dr. Mahn, Mahn referring to one of the characters in his name. He built a museum next to his scenic cafe overlooking the Bukhan River. He went on numerous overseas trips to study the coffee culture in different countries.
“I read every kind of coffee book they had in Japan and started from scratch,” he said of his effort to start Waltz and Dr. Mahn.


“After finishing Japanese books on the subject, I started reading Western books in English about coffee and was surprised, actually shocked, at how different the coffee culture was in these parts of the world. For example, in the Japanese books, I read that when blending, one shouldn’t use more than five different kinds of beans but in English books, 10 or even 20 different kinds of beans are allowed during the blending process,” he said.
This was the first time that Mr. Park realized that the culture growing up around coffee develops unique characteristics depending on where it was grown and roasted.
“After thinking about it, I realized that both [the Japanese and the Western methods] were right. In Japan, they traditionally mixed only a few coffee varieties because they emphasize the original flavor of each individual type of bean. In the West, however, they focus their attention on being creative and making a new kind of coffee by mixing different flavors in one mix. It’s a difference of where each [place] puts its focal point,” he said.
It was in the 1880s that missionaries from the West brought coffee into Korea. Although drinking coffee has become common in this country, it is still looked upon as “foreign.” During the Saemaeul Movement in the 1970s (a national movement to improve the standard of living led by then president Park Chung-Hee), drinking coffee was discouraged as it was a cultural import from the West. Instead, drinking traditional Korean teas was encouraged. “This stunted the evolution of a stable coffee culture in Korea but now, even if you travel to the most remote farm village in the heart of Gangwon province, you can find old men and women drinking coffee,” Mr. Park said.
Even so, Mr. Park feels that Korea’s coffee culture is fragmented. “Young people trying to make it in the coffee industry these days think that making a decent cup of espresso is all there is to know. In other words, they are not specialists. The word barista derives from the Italian word meaning bartender. People are too caught up with being good baristas and making money. While that has its place, you need a passion to go along with it; a passion to know the rich history and cultural context that lies behind every single coffee bean,” he said.
Mr. Park also feels disillusioned by chains, such as Starbucks, saying that although the franchise helped bring coffee into the limelight, it has commercialized it to a degree where there is no longer any sense of individuality or history. “It was so annoying to go to Seattle and see Starbucks on every street corner. It made me angry,” he said. “I like the fact that in Japan, 50-year-old cafes sit next to Coffee Bean or Starbucks and people accept that. Somehow, the country figured out a way for the old and new, commercial and non-commercial, to coexist.”
As a part of his effort to get a more comprehensive glimpse of coffee, Mr. Park is leaving Feb. 8 on a 22-day trip to explore the bean’s birthplace. Starting from Ethiopia, Mr. Park ― along with a student studying photography, a student studying literature and a producer from KBS network ― will travel to places including Damascus, Istanbul and Cairo. The KBS producer plans to film a documentary of the trip. Mr. Park plans to write a book (he has already closed a deal with a publishing company) about this adventure and hold a photography exhibition. The documentary will be aired on the show “Wednesday Plan” on KBS.
“I want this adventure to be about more than just cold facts,” he said. “I want to bring back rich, personal stories and excite young people who are interested in coffee.”
He plans to go on a second trip this fall.