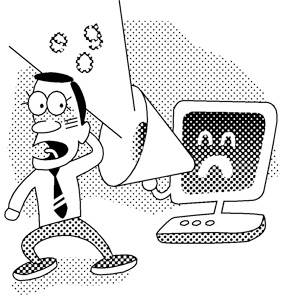 The Internet is a treasure trove for newly- coined words. Ego-surfing refers to using search engines to seek references to one’s own name. Google-stalking refers to finding old friends and lovers. The terms are related to Internet addiction. Furthermore, keyboard warriors refers to cybercitizens who leave malicious messages.


Many words are formed through the Internet, mainly slang words and popular catch phrases, like “eoljjang” or pretty face; “ssaengeol” or no-makeup face; “doenjangnyeo” or bean-paste girl (gold-digger); “naksijil” or hooked by a flamboyant headline; “hunnam” or an attractive man; “anseup” or evokes tears; and “wanso” or completely precious. Although some complain that these words defile the language, many people use them as a sign that one has not lagged behind the times.
New words are a mirror of society as well. There is a long list of words related to long-term economic depression and the difficult job market ― phrases like “itaebaek” or rising youth unemployment; “saojeong” or forced into early retirement; “igubaek” or 90 percent of people in their 20s being unemployed; and “sipjangsaeng” or teenagers thinking about unemployment in the future.
New words are also a product of corporate marketing. The newfangled word, “OO Generation,” appeared in unison with new spending patterns. In many cases, a marketing report may serve as the source for new words; terms like the NOMU Generation or the “No More Uncle Generation” or the NAOMI Generation or the “Not Old Image Generation” target the pocketbooks of middle-aged people avidly interested in their appearance.
The onslaught of new words on a daily basis is evidence of a vicissitudinous society. Words are produced in conjunction with the speed at which society is moving. It is noteworthy that the source of new words is changing; the media and intellectuals were the traditional sources, but now, the rise of the Internet is influential. Anonymous cybercitizens perform the powerful act of creating new words and ideas. One could say that the democratization of language has been realized through the Internet.
Briskly created words, however, often have a short life. In contrast to the saying, “New words function as doors and keys to open up new ideas and worlds,” (from “The Cultural Phenomenon and Insolent Newfangled Words”) the fate of words in modern society is like a transient, blinking star. Recently, politicians are creating newfangled words. Frivolous words with no substance can be heard everywhere, making us long for a time of verbal self-control.

The writer is a culture and sports desk writer of the JoongAng Ilbo.