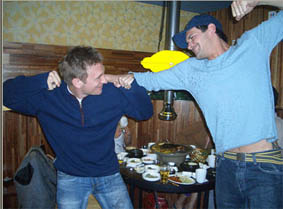 British drum and bass legends and good friends Fresh, left, and Shimon in a Hongdae restaurant. By Richard Scott-Ashe

D.J. Fresh and Shimon are friends, even though no one expects them to be. Given that their current tour is entitled, “Clash of the Titans ― A Head-to-Head Drum and Bass Spectacle,” and that they are key figures in two of the biggest drum and bass labels in the world, the mistaken expectations are understandable.
Their first visit to Seoul last Saturday, by invitation of Club Cargo, proved to be an education for clubbers and the D.J. friends alike.
Although renowned as one of the most popular drum and bass D.J.s and producers in the world, Fresh is warm and unassuming in person. On meeting him, it is difficult to imagine that he is co-founder (along with Adam F) of the legendary British drum and bass label Breakbeat Kaos. He has worked with such names as D.J. Shadow, Pendulum and the Pet Shop Boys, and regularly plays to crowds of thousands around the globe.
He is soft-spoken and self-deprecating, saying of his jam-packed gig at Hongdae’s cozy Cargo, “It’s always cool to be part of something growing.”
Shimon, one-third of the famed Ram Records trilogy (along with Andy C and Ant Miles), is also highly respected on the international scene.
After finishing in Seoul, Shimon is scheduled to begin an Australian tour. He will then continue to spin in Los Angeles, returning to the United Kingdom in another month.
For those who don’t know, drum and bass (commonly known as jungle) refers to twitchy break-beat drums bouncing around a heaving series of intricate basslines.
A distinctly underground style of music since its beginnings in the early ’90s in the United Kingdom, it has grown to have an international following and has reverberated through popular culture.
Drum and bass arrived in Seoul around 1999, close to the same time that Han Ik-su, Cargo’s owner, opened Club 101, which later became Cargo.
Mr. Han has been a D.J. for 20 years himself, mostly in Itaewon, and devotes his energies to promoting his passion, drum and bass music.
Cargo, since it opened in 2003, has been the cornerstone of the local drum and bass scene.
Their “Junglist” night is the driving force behind the burgeoning drum and bass scene in Seoul.
“Junglist” is the name commonly given to ardent fans of drum and bass.
Cargo Manager Venus, an Aussie who has been in Korea for four years, is in charge of enticing big-name drum and bass D.J.s to come to Seoul. She says that it’s becoming increasingly common for those performers to include the Korean capital on their list of tour cities.
Only a short time ago, in order to get recognizable names behind the turntables, she would have had to organize Asia-wide tours for the D.J.s herself, and include Seoul as a pay-off for her trouble. But the drum and bass scene is “a community,” she said. “It just takes one person to connect to everyone.”
And the word is out that Seoulites love the music and come out in hoards to the big nights. When asked the reason behind the popularity of drum and bass, she said, “It’s unique. It’s free from being commercial. It draws from all kinds of music. You never know what to expect.”
Fresh agrees. “I didn’t know what to expect,” he said, of his first visit to Seoul, “but I was definitely pleasantly surprised. It was a really good vibe. I felt like staying afterwards, whereas after big gigs sometimes I just want to go home. I wanted to talk to the people. It was a much more intimate vibe.”
Fresh said he played a much different set from what he would have played in the United Kingdom, where the scene developed and is thus more discerning.
He enjoyed being able to dip into his record boxes and pull out some older classics, because a lot of the other crowds he plays to wouldn’t let him get away with spinning anything but the newest, unheard releases.
“I’ve got a responsibility not to scare people away,” he said. “I’ve got to help people get into drum and bass.”
The crowd at Cargo responded enthusiastically, cheering on each new bassline twisted into the mix.
Both the D.J.s said that, having been to Seoul and experiencing the scene here, they’d love to come back in the future.
Venus and Mr. Han were more than happy to hear it, as will be the growing number of Seoul clubbers addicted to drum and bass.
When asked who won the so-called “head-to-head,” Fresh and Shimon laughed and jokingly held up their fists.
“I knew you were going to ask that,” said Fresh.