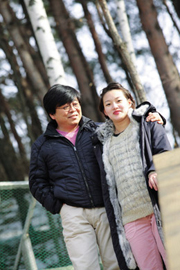 Celebrity architect Lee Chang-ha, 52, has married a woman half his age. The marriage was made public by a monthly woman’s magazine, Yeoseong JoongAng, which interviewed Mr. Lee. The architect, who for the last couple of years had appeared on television shows, has not appeared lately. This is Mr. Lee’s third marriage, and he will soon be a father of six children, the magazine said in their February edition. Four of the children are from previous marriages.
Mr. Lee married Lee Ju-yeong, now 26, three years ago. They met on the set of MBC’s “Shin Dong-yeop’s Love House,” a televised home remodeling project for needy homes. He was the star architect and Ms. Lee an assistant designer on the staff team. He said they got along very well because they were both art majors and had similar tastes. But he was reluctant to express his romantic feelings for her because Ms. Lee was younger than his eldest daughter, who is now 28.
“But my children understood me and I got the courage to bring up the subject,” he said.
The couple finally won over her parents, who were shocked by the relationship. But even after her parents gave their consent, Ms. Lee said she cut off former friendships because she was afraid others might not understand. It was only after she gave birth to their child that she started to meet her friends again. Jeong-hyeon and Beom-do, Lee’s two eldest children, are getting along fine with their new mother, she said. 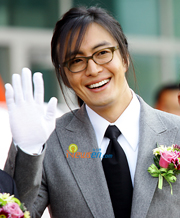 Last year, actor Bae Yong-joon paid a total of 9.7 billion won ($10.3 million) in income tax, making him the highest tax paying Korean hallyu celebrity ever.
His tax was calculated based upon his total income from 2005, which was 32.9 billion won. The Korean tax law charges 35 percent of a person’s income if it surpasses 80 million won a year.
BOF, Bae’s management agency, said 90 percent of Bae’s income came from Japan, where he is better known as “Yonsama” and has a bigger and more loyal fan base.
Bae did not appear in any films or television dramas in 2005. Some 70 percent of his income came purely from royalties and the sale of his character merchandise, including DVDs, souvenir T-shirts and mugs printed with his photos, which sell steadily in Japan.
BOF said that they were now getting ready to promote a tour package of the outdoor filming site on Jeju Island for Bae’s upcoming drama.


by Lee min a [mina@joongang.co.kr]