[DVD review]Film that hits the screen not the fan

[DVD review]Film that hits the screen not the fan 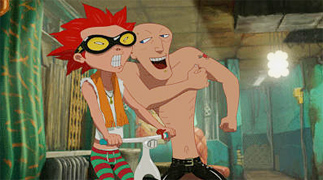 There is a whole list of studio animations that might have influenced the production of “Aachi and Ssipak” ― “South Park,” “The Simpsons” and “Beavis and Butthead,” to name a few. But the film, the latest feature animation from Cho Beom-jin, is undeniably Korean, including the title, a slang word used to describe village hoodlums.
The toilet humor and cursing by the characters is also Korean; they walk, talk and spit like young Korean boys seen on the streets.
The story has the sensibility of an underground comic. It examines a city where normal human beings live side-by-side with mutants who have malfunctioning bowels. The only remaining energy source in the city is human excreta. To ameliorate a shortage of energy the government hands out popsicles that induce excretion. The mutants, unable to produce sufficient excrement, are forced out of the city. The city is full of smugglers like “Aachi” and “Ssipak,” who live by trading popsicles. The film is uniquely twisted and walks a none-too-fine line between satire and trash.
It has some of the most unique characters in animation history including “the diaper gang,” strange blue mutants who wear diapers to deal with their excremental issues; “the director,” an aggressive female police chief with the face of a Blythe doll; and Jimmy, a gay animation director who has been convicted of making lewd movies.
It’s hard to imagine that an animation with such “depraved” (as the director himself has put it) content could find a significant audience, but its box office performance was good. (Production staff said that one of their most difficult moments was when potential investors accused the film of being “too unique,” and asked why it needed to be made.)
As one viewer wrote on a Web site, the film’s dialogue, which consists almost entirely of cursing, has “a mouth that’s dirtier than a toilet.” Nevertheless, the animation, which took eight years to complete, stands on its own merits. The swearing has a context in the drama and is not there just to shock people.
The camera movements are intensely dynamic. The chase scenes are real and the angles are swift and visually captivating, parodying scenes from films like “Indiana Jones” and “The Matrix.” The voices also work well, adding distinctive characters to the narrative. For those who need references, the film was shown at the International Film Festival in Rotterdam.
Yet it’s better not to expect that this animation will display the same kind of political critique found in many Japanese cartoons. At a press conference the director simply asked reporters “to watch the animation without any expectations.”
In many ways “Aachi and Ssipak” is a biting parody of Disney animations and auteur films in general ― and that’s one of the reasons why its humor works so well. For example, when “Beautiful,” a stuck-up actress, tells her arty director to get a life, she says, “why should I give a damn? I am a beautiful woman, and that’s all that matters.” Perhaps that’s the charm of this animation. It has attitude to spare.