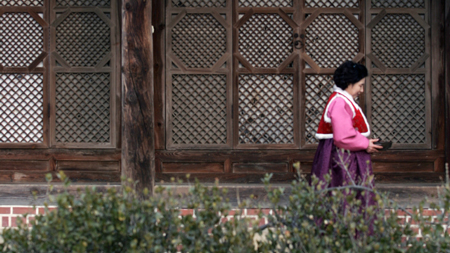 the lady of the house, Kim Jeong-ok, carrying a bowl of paste

Surrounded by pine trees in the middle of a farming area in Boeun county, North Chungcheong province, there sits a centuries old traditional-style house. Paddocks are set up between several buildings. Passing through a wooden gate into one of the paddocks one enocunters many jars of different sizes and one of them is a crown jewel. This jar has soy sauce that began its life 350 years ago and each year the ladies of the house add more to the brew.

The story of this soy sauce with its ancient lineage was featured in the local media a few months ago after two one-liter (32 ounce) bottles were sold for 5 million won ($5,260) each at a department store. The costly soy sauce was made by many generations adding fresh-brewed soy to existing liquid, the “seed” sauce, every year for the last 350.
Wearing traditional Korean clothes, Kim Jeong-ok, 53, the current lady of the house, appeared in the courtyard of the old mansion. ― she has been carrying on its traditions since she married into the family 30 years ago.
“When I first came to this house, I saw the fence and the gate that surrounded the soy sauce jars. I knew this family cherished soy sauce and soybean paste very much,” said Ms. Kim, a cheerful and optimistic woman who occassionally seems shy.
Among the many jars, the one that contains the seed sauce is circled by a straw rope from which hang red peppers and pieces of paper in the shape of traditional Korean boots. These are to drive away evil spirits, according to Ms. Kim, and to stop the sauce turning sour. Although the sauce was advertised in the department store as if it were 350 years old, that was not entirely true, because fresh-brewed soy sauce has been added to the seed sauce each year.
“The original bacteria could have remained,” said Ms. Kim. 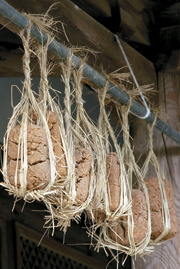 The ancient soy sauce is not to be consumed. It is used for family rituals when relatives pay tribute to ancestors. It is poured into a small bowl and the bowl is put on a table along with many different foods dedicated to past generations.
“I have tasted the old sauce and it has a sweet taste. The salty flavor disappears a little and it tastes like aged soy sauce,” Ms. Kim said.
The preparations for making soy sauce and soybean paste begin in the fall. Ms. Kim boils about 80 kilograms(176 pounds) of soybeans in large traditional iron cauldrons over a wood fire. The boiled soybeans are formed into square blocks and fermented until the following Lunar New Year’s Day. Then the soybean paste blocks, or meju, are put into jars with salty water, which in time turns into soy sauce.
“What I care most about when making soy sauce is the level of saltiness,” Ms. Kim said. “Temperature is also a big factor and the timing needs to be adjusted accordingly. If this goes wrong, soy sauce can have a sour or astringent taste.” 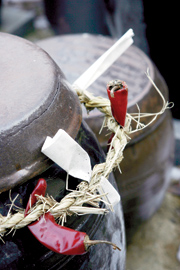 the jar containing the “seed” soy sauce produced by a 350-year-old tradition. By Lee Chan-weon

Ms. Kim said good raw materials, a pollution-free environment and the temperature of the area, along with a 350-year-old tradition, are what makes her soy sauce special. She uses only soybeans naturally grown out of yellow soil, sun-dried salt that has been kept for one year and water drawn from a well.
“The area has relatively large daily temperature differences and fruit harvested here taste,” she said.
“Our family makes our soybean paste blocks a couple of weeks earlier than others so that they get more days of fall sunshine. We put many soybean paste blocks in jars so that they are piled one over another, while others leave soybean paste to float in the jars,” she said.
Though born in Gwangju, Ms. Kim grew up in Seoul and worked for a cosmetics manufacturer when she was a young adult. She was introduced to her husband by her husband’s uncle and they got married in 1977. It took 10 years for her to make soybean paste blocks on her own. In the beginning she did chores and followed instructions given by her mothers-in-law, her father-in-law being rich enough to have two wives.
“When I first got here, there were two mothers-in-law and my husband’s grandparents were also alive,” she said.
Her husband’s family adhered to the Confucian traditions of the Seon clan. Originally from Boseong county, South Jeolla province it had many family rituals to pay tribute to ancestors. Ms. Kim’s was the head family of her clan because her husband was the first son of his father, who had also been a first son.
“When I got married there were 13 such rituals a year and now we have nine,” she said. “The family believed that serving ancestors well would lead to prosperity. The rituals used to be so grand.” 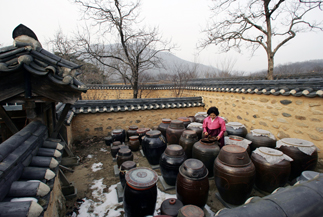 Kim Jeong-ok in the middle of the paddock that houses the jars containing soy sauce and soy bean paste. By Lee Chan-weon

The Boseong Seon clan moved to Boeun county 100 years ago because they believed, according to pungsujiri, the Korean version of feng shui, that the nearby Mount Sokni is a venerable place and moving to the area would help produce a famous historical figure in the family, although, she said with a smile, “There has been no such figure yet.” The clan used to own most of the land in Boeun county and even a large chunk of land in nearby Daejeon. The current house used to have a mill and 60 rooms ― it was the biggest size for a family house that was permissible during the Joseon Dynasty. Sadly, the house suffered significant damage during the Korean War (1950-1953). It was registered as “important national folklore material, No. 134” in 1980.
“It is such a large family, and it is difficult for women. Keeping tradition is very hard. I’ve spent days preparing food for rituals and had to clean up everything until midnight. The rituals are the most important event for a head family,” Ms. Kim said.
In the beginning, it was difficult to adjust to a new environment because of cultural differences between her family and her husband’s. “My family was very liberal,” she said.
Her parents-in-law, however, were kind to her, especially her father-in-law. Her mother-in-law was also from Seoul, she said, and was prepared to listen to new ideas.
For 30 years, the daughter-in-law from the city has brought changes to her Confucian head family. Tired of making a fire with firewood and using large cauldrons for everyday cooking, she installed a modern kitchen, a move that was met with anger.
“My father-in-law was so mad at me that he did not talk to me for days,” she said.
Ms. Kim went further. Rather than carrying a dining table laden with food to the living room every time her in-laws and important guests came to dine, she asked them to come to a dining room she set up beside the kitchen.
“In the beginning, my father-in-law refused to come to the dining room,” she said. “It took one year for him to change his mind.”
Ms. Kim said carrying the table every mealtime was troublesome. Most of all, food got cold in winter when the dining table was carried to the living room.
“My father-in-law thought it was unthinkable for guests to come to the dining room to eat. He felt serving guests in the living room was the way to welcome them,” Ms. Kim said.

Now her parents-in-law have passed away. She gave birth to two daughters and one son, her youngest child. All of her children are either married or studying in large cities. “I had my son very late and for that I was almost kicked out of the family,” she said.
To take advantage of vacant rooms in the house, she rents out rooms to students studying for government exams. Taking care of these students and providing them with food now takes up most of her time.
Asked whether it would be possible to have a daughter-in-law who would be willing to carry on the traditions, she said, “That is entirely up to my son. He is now studying Korean traditions and he said there are many girls who are interested in the traditions.”
Her son intends to help her develop a soybean paste mixed with jujube. Jujube is one of Boeun county’s farm products and the county has asked Ms. Kim to develop products that can help local farmers. Last year, she boiled 2,000 kilograms of soybeans, which is 25 times larger than her usual load, to produce bean paste. The county plans to sell the bean paste to tourists.
Asked whether it was hard to be married into a head family, she said, “I don’t have memories of hardship.” Then Ms. Kim said, “I tell my son to marry a career woman. If she has a career, at least she can excuse herself from preparing for family rituals.”