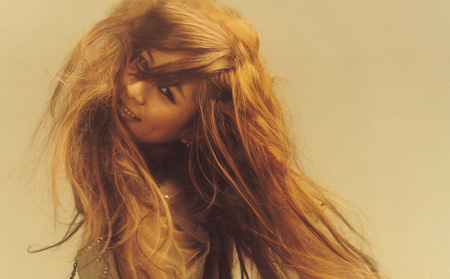 BoA’s latest album “Made in Twenty,” released last week, has hit number one on Japan’s Oricon weekly album chart.
The Korean singer’s popularity has been skyrocketing in Japan since she released her first regular album “Listen to my Heart,” in 2002. The singer has seen all five of her albums ― including the most recent ― rise to the top of the influential Japanese Oricon chart, which is considered to be on a par with Billboard in the United States.
Being listed at the top of the Oricon chart means an album has sold at least 100,000 copies in the previous seven days.
In an interview with the JoongAng Ilbo via e-mail, BoA said she she feels like she is ready to put more emotion into her music. She said songs about heartbreak would sound more natural and convincing now that she has greater maturity.
The young Korean singer said her dreams do not end there. “I want to be an Asian singer who is recognized in the United States and Europe,” BoA said.
“I think I would be most happy when I sing with world’s best singers on the same stage and rank number one on the Billboard chart.”
BoA said every singer dreams of being recognized in the United States. And she is no different. Although currently there is no specific plans for her to enter the U.S. music market, she has spent time learning English. “While working in Japan, I realized how important singing in the local language is,” BoA said. “One could only become a true signer when delivering the feeling and the meaning that the lyrics hold.”
BoA said she has made a contribution to her native Korea by promoting Korea’s outstanding qualities and she has proved that a young Korean singer can make it in Japan.
But working in Japan and Korea has not always been easy for the young singer.
“At first I felt confused because the environment and culture between Korea and Japan was so different. I was also burdened by the attention I was getting. It was even difficult when I was interviewed because I had to think of the position of the two countries,” BoA said. “Now I’m pretty much used to dealing with it.”
She says from time to time she wanted to switch places with the students wearing school uniforms that came to see her show. Yet she says she is fortunate that, as a young pop singer, she has had the opportunity to experience both countries and the joyful memories that only singers can feel.
She says her music is like a colorful rainbow. The young singer says she hopes to sing some sad ballads. She also wants to expand her career into acting.
Although she is an iconic pop singer in Korea and Japan, she still has complaints like any other girl her age. “I wish I was taller. I feel envious of people who look good even in shoes without heels. For this reason I hope my boyfriend will be tall and have a nice personality.”
Industry experts say BoA is capable of becoming one of Japan’s most successful pop singers with album sales of over 10 million because of a strict localization strategy. BoA was picked up by SM Entertainment in 1997 when she was only in the fifth grade. The company considered BoA to be a talent that could be exported to the Asian market with the group H.O.T. The young girl received rigorous training so she could compete in the Japanese market where girls aged between 13 and 16 hold top positions in the J-pop market.
First, she received language training including visits to a Japanese television announcer every time she had a break from school. BoA launched in Korea with “ID: Peace B” on August 2000. The album climbed rapidly up Korea’s music charts.
In March of 2001 BoA initiated her first step in Japan. SM Entertainment arranged an agreement with Avex Trax, a major Japanese entertainment company, to help BoA become the best entertainer in the country via star marketing.
She started off with a mini album, “Jumping into the World.”
Her regular album appeared a year later. In 2004, BoA was named Favorite Korean Artist and Most Influential Asian Artist at the MTV Asia Awards.