Best of the best on display at the Seoul Press Center

Best of the best on display at the Seoul Press Center 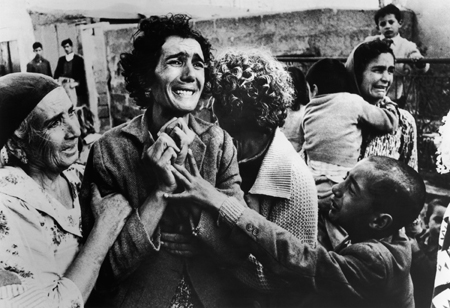 A woman mourning for her husband who died in the Turkish War, The Observer, 1964. The photo is part of the World Press Photo exhibit at Seoul Gallery in the Press Center, central Seoul. Provided by the organizer

Francis Bacon once said that seeing an object in its unadulterated form is better than studying a precious work of art. Photojournalism has been chronicling these “captured moments” for decades.
An upcoming exhibit at the Press Center’s Seoul Gallery, “Things As They Are,” will display some of the best photographs and videos taken by photojournalists during the last half century.
The exhibit is made up of three parts.
In the first, there are award-winning photos from the last 50 years. In a black and white photo taken by Don McCullin for The Observer in April 1964, a woman mourns the death of her husband during the Turkish War.

A mother’s hands caress her child’s head in a photo taken during the 1974 famine in Niger. The photograph was taken by Ovie Carter for the Chicago Tribune.
A Korean mother begs an armed officer for her son’s return after he was arrested for attending a protest against election fraud in a photo taken by Anthony Suau for Black Star in December 1987.
In one of the most captivating pieces, an Iraqi father soothes his son in a prisoner-of-war camp in Najaf in March 2003, taken by French photographer Jean-Marc Bouju for the Associated Press.
In the section on Korean photojournalism, Park Chung-Hee, clad in a military uniform, stands surrounded by his “gang” near Seoul City Hall in 1961, taken for the AP. The scene depicts the political authoritarianism that Park’s military dictatorship was known for. 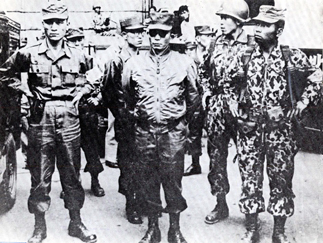 Former president Park Chung-Hee in a military uniform with his close aides, published by the AP in 1961.

In another, Korean guards beat citizens on the streets during the democratic uprising in Gwangju in 1980. A student rescues a friend ― Lee Han-yeol ― who had been hit by a Molotov cocktail during a protest in June 1987 in an image published by Reuters. The last section of the exhibit consists of pictures taken by prestigious photographers. Russians practice a folk dance in an image by Henri Cartier-Bresson, taken for Paris Match in 1955. There are also 1976 Richard Avedon portraits of former President George H.W. Bush and James Angleton from the Rolling Stones.
A Sunday Times Magazine photograph features a gold mine in the Serra Pelada region in Brazil, taken by Sebastiao Salgado in 1987. Mr. Salgado held a giant exhibit at the Press Center two years ago.