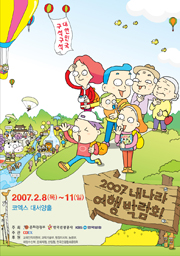 Been there, done that.
You might be thinking there’s nothing left to do in Korea, and that’s exactly what’s bothering the country’s tourism commission.
With the rate of overseas trips rapidly increasing every year, the Korea Tourism Organization is determined to convince people that Korea still has a lot of previously missed places that are worth seeing.
Next Thursday, it will host the biggest travel expo of the year with the help of over 200 provincial regions and domestic travel agencies.
“It’s hard to avoid the travel deficit in the domestic travel industry,” said Ok Jong-gi, the head of the domestic travel promotion team at the Korea Tourism Organization. “We’re hoping people will come [to the expo], look around and leave with useful information.”
One display features the work of amateur photographers. The photos capture the pristine beauty available to those who venture beyond the limits of Seoul and Korea’s other major cities.
“You will be saying ‘I never knew there was such a place in Korea’ when you see them,” said Park Young-hee, one of the event’s organizers. Mr. Park selected about 50 of the photos for the display.
Besides the photo display, the “Korea Travel Expo 2007” will have tour agencies and travel schools available to guide people toward temple stays, 5-day traditional outdoor markets and historical sites. Visitors can expect plenty of shopping for outdoor goods. There will be concerts, musical performances and lottery drawings.
As an added draw, free travel journals will be given to visitors who visit all the booths at the expo and collect a stamp from each exhibitor.
President Kim Jong-min of the Korea Tourism Organization said last Tuesday that the goal is to draw 7 million foreign visitors to Korea this year.
The organization will use active marketing and enhance travel infrastructure.
Signboards in Chinese and Japanese will be added, and signboards with mistakes in English will be corrected. The signs are to be posted in Seoul in about two months.
The number of foreign visitors to Korea last year was 6.15 million, while 11.6 million Koreans traveled abroad.