A place for fine hwangtae and stomping on cold fish

A place for fine hwangtae and stomping on cold fish 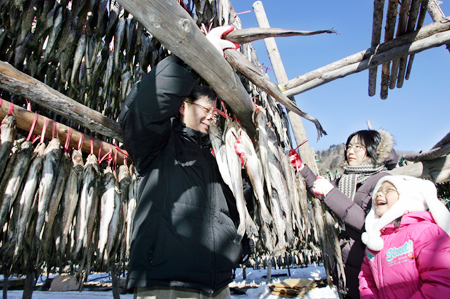 Hwangtae hanging out to dry in Yongdaeri. By Ahn Young-soo

Yongdaeri is a small village of less than 400 residents located in the rough mountains of Inje county, Gangwon province. At this time of year, a frozen stream reflecting sunlight runs alongside the road that leads to the settlement.
Here, every winter, the snow and cold wind are welcome visitors, greeted by the villagers with a warm embrace. There is nothing much to see, except nature itself and numerous walleye pollacks, known as hwangtae, drying in the breeze as they hang from wooden logs.
A few yards from the road rows and rows of hwangtae stand out against the snow that fell a few days previously. It’s no surprise to learn that Yongdaeri and hwangtae are synonymous in Korea. There are 10 hwangtae farms here, employing people from 105 of Yongdaeri’s 138 households. 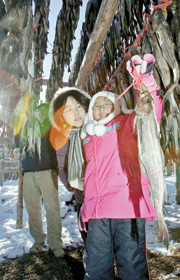 According to the village, Yongdaeri accounts for 70 percent of all Korean-made hwangtae. The remaining 30 percent comes from nearby Daegwallyeong.
Unfortunately, villagers say Korean-made hwangtae only has a 15-percent market share of the Korean market. The rest comes from China.
“The quality of hwangtae produced in China is not guaranteed,” said Choi Yong-jin, the head of the village. “In fact Chinese people don’t eat hwangtae. It is only Koreans who enjoy it.”
The villagers say Yongdaeri has the perfect geographical and natural setting for drying walleye pollacks. They claim the hwangtae would not be as good if the farm that produced it was located north or south of Yongdaeri.
It is the bitter cold and the strong wind, as well as the heavy snow that settles in the village that makes its hwangtae so juicy and delicious.
Whilst visiting the area, visitors are offered the chance to place the fish on the logs to dry. But they will not have the opportunity to actually catch any walleye pollack. The fact is, Yongdaeri has lost its walleye. “It has been a long time since we had our own fish. We import pollacks from Russia,” said Lee Jong-goo, the village director. “Because of the rising sea temperature all the fish moved up north to waters that are in Russian territory.”
The villagers say there are three factors essential for processing hwangtae: wind, cold and snow.
The fish, whose internal organs are taken out before being dried, are repeatedly frozen and thawed while hanging on a log. 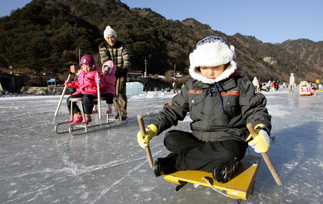 The walleye pollacks have to be frozen immediately after they are caught to keep their meat juicy. They must be kept at an average temperature of below 10 degree Celsius for at least two months.
The entire process of drying walleye pollacks begins in December and ends in March. The hwangtae are then sent to a storage facility, packaged and distributed.
Hwangtae is said to be effective in fighting hangovers.
“In recent years there have been growing numbers of calls from outside the village from people who want to come and hang the fish,” Mr. Choi said.
To get information about the village and the hwangtae experience go to http://www.yongdaeri.com, or call (033) 462-4808. However, the residents do not speak English, so it’s best to contact people in the village with help from a Korean friend.
From March 1 to 4, Yongdaeri will hold its annual hwangtae festival. The event was inaugurated in 1999 and was originally intended for the farm workers to thank them for their efforts during the winter. It is now considered to be one of the most popular festivals in the country.
The villagers said they tried to base their event on the annual snow festival in Harbin, China.
On the first day of the festival a hwangtae cooking competition takes place with a top prize of 6.6 million won.
Anyone who wishes to compete must sign up by Feb. 20 via the town’s Web site. The competition is divided into a general competition and a student competition. Each competition consists of 30 teams who cook a variety of hwangtae dishes.
Hwangtae is most delicious when it is made into hwangtaeguk or hwangtae soup. Although there are different ways of cooking this broth the most commonly-known method involves boiling water for 15 minutes with sea tangle and pa or sping onion. A cleaned and skinned hwangtae is then added along with a radish and a spoonful of garlic . When served, salt can be added according to taste.
Another delightful recipe for hwangtae is hwangtaegui ― gui means roasting.
The hwangtae is first soaked in water to make it juicier and then drained. It is then brushed with a mixture of soy sauce and sesame oil and roasted. A special sauce is made from gochujang or red hot pepper paste, soy sauce, sugar, sliced spring onion, sliced garlic, sesame oil and salt. The special sauce is brushed on the dried fish and then it is roasted some more. The entire process takes about 40 minutes. The special sauce can also be purchased at local stores.
The village also offers other kinds of entertainment apart from eating hwangtae or hanging it up to dry in sub-zero temperatures. 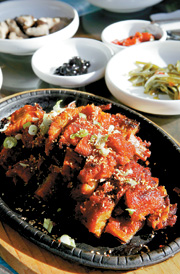 Although it still needs some renovation, the Yongdaeri ice skating park will undoubtedly bring back memories for many parents who played on frozen lakes and streams during the winter before the Playstation or Xbox 360 were invented.
The ice park has no admission fee, although there is a small payment required to rent various types of sled. The most common is a square wooden platform where the rider sits on top and starts pushing forward with two sticks that have sharp metal ends. Some of the sleds are made from old metal chairs hat have been bolted to the wood.
During my visit, two sisters from Austin, Texas were out on the ice and seemed to be having the time of their lives.
In addition there is a temporary pond made out of rubber inner tubes that contain live fish. Adults and children can catch the fish using their bare hands at certain times of the day. Since the water is murky, finding the fish can best be done by stomping in the water. Unfortunately the village does not have a center for the emergency treatment of frostbite ― one is definitely required after a session of sub-zero stomping.
On the far right is a soccer “field” that uses a frozen lake as its playing surface. An ice sculpture of a pig sits in the middle of the lake while four huge animal sculptures made of snow have been placed around the soccer field. The animals include a lion that looks more like a puppy, a wild boar and two smiling pigs. 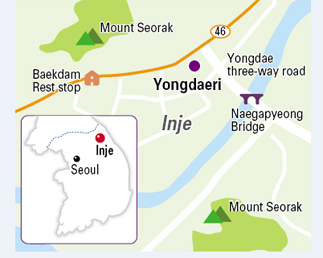 For those who like extreme sports there is a cliff, Yongbawi or “Dragon Rock.” It has a frozen waterfall that is available for ice climbing and is nationally renowned. Between Jan 13 and 15 a competition to select the Korean ice climbing team was held at the cliff.

Essential detail
To reach the village by car from Seoul head toward Hongcheon then to Inje then to Wontong.
Arriving at the Minye Complex three-way intersection, take a left turn towards Jinburyeong and Misiryeong and head towards Baekdam temple. Then take the road to the Yongdae three-way.
When starting from Sokcho, take the road to Misiryeong and head towards the Yongdae intersection. It should only take 30 minutes.
When taking the bus, take one heading towards Sokcho but make sure it will be stopping at Yongdaeri or the entrance to Baekdam Temple.

Information on accommodation and restaurants are all available on the Web site, www.yongdaeri.com.