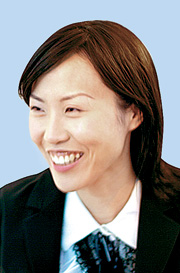 The JoongAng Ilbo caught up with Gina Kim at the Sundance Film Festival. The director, who debuted with “Gina Kim’s Video Diary” and made the movie “Invisible Light,” is currently teaching film production at the visual and environmental studies department at Harvard University.

JoongAng Ilbo: So how did you come up with the idea for “Never Forever”?
Gina Kim: I first thought of doing a horror film but around the time I got an invitation from Harvard to come to Boston, I changed my mind. I gave my scenario to Lee Jun-dong [the president of Now Film], whom I have known for a long time, and he liked it.
Andrew Fierburg [head of Vox3 Film] is the husband of a teaching colleague of mine. He and I met during Im Kwon-taek’s [noted Korean director] retrospective and decided to work together.
JoongAng Ilbo: What is the theme of the movie?
Gina Kim: It’s about a woman’s desire. A lot of men see women as either a mother figure or a whore. I wanted to break away from this mold. I think a woman running after the realization of her desires is also a woman on a journey toward finding her path in life. In the movie, after becoming a mother, Sophie begins to love and look at her life from a positive perspective.

JoongAng Ilbo: In Sundance, this movie was introduced as an American film.
Gina Kim: Here, nobody sees this movie as a “Korean movie.” They see it as a movie starring Korean-Americans. Although capturing Korean audiences is also important, there is a lot more potential in the American film industry. So far, the response from American audiences and the press has been much more than what I had expected.