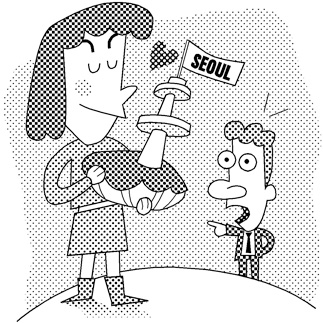 There are cities around the world that are truly inspiring ― artists dream of them and they serve as artistic motifs. Movies take advantage of these cities, using them as film locations; they adopt images of the city and display their beauty. Some cities become famous after appearing in a movie.
New York is a city beloved by the movies ― there are even directors like Woody Allen, who once set all his movies in New York. In his eyes, a New Yorker is the epitome of a modern, obsessive-compulsive intellectual. The Empire State Building (“Sleepless in Seattle”) and the Wollman Skating Rink in Central Park (“Serendipity”), which have appeared in many movies, are romantic hot spots. The television situation comedy “Sex and the City” has infected young women around the world with “New York envy.”
“Roman Holiday” comes to mind when thinking of Rome. Backpackers poured into Prague and Vienna after movies like “The Unbearable Lightness of Being” and “Before Sunrise.” The movie “Nottingham” made London’s Nottingham Market a tourist haunt.
London is becoming a popular location for movies. Even Woody Allen has left Manhattan to shoot three films in London. Coupled with the popularity of British actors, some have called this the second wave of the British invasion.
You cannot leave out Paris ― a city synonymous with freedom and art ― when discussing cultural and artistic cities. The movie “Paris, I Love You,” which is currently in release, is an omnibus film that reveals the affection 18 world-renowned directors have for the city. They divided Paris into 18 districts and shot 18 short films.
Gus Van Sant shot a film about understanding, told through the eyes of a gay youth living in Le Marais, the city’s homosexual community. Walter Salles shot his short film in the expensive 16th district; he addresses the class problem. The last episode is about an American housewife who dreamed of vacationing in Paris. Feeling lonely during her trip, the movie ends with her sitting on a bench, smiling and saying, “I feel alive. Paris, I love you.”
What about Seoul? Although Seoul is industriously reshaping itself, it still lacks a cultural image. Songs like Lee Yong’s “Seoul” and Jo Yong-pil’s “Seoul, Seoul, Seoul” seem manufactured by the government. What about modeling Seoul after “Paris, I Love You”?
If the galaxy of Korean directors rediscovers Seoul in their movies, through the window of a movie like “Seoul, I Love You,” people of the world might look at Seoul with new eyes.

*The writer is a cultural and sports desk writer of the JoongAng Ilbo.