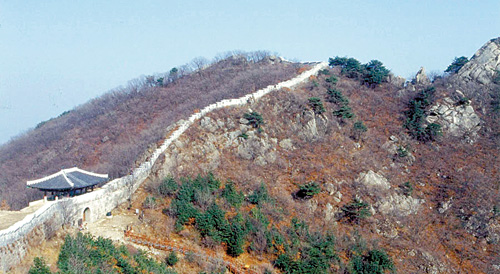 A portion of the fortress wall that surrounded the Joseon Dynasty capital in the late 14th century. The part shown above is located on Mount Bukhan in northern Seoul. Provided by the Cultural Heritage Administration

8th in the series | Korean Fortresses

The No. 1 National Treasure of Korea, Namdaemun (the great south gate), sits marooned near the foot of Mount Nam, surrounded by a sea of traffic. Since last year, pedestrians can walk near the gate and take pictures of gatekeepers dressed in traditional costume. What most people do not realize is that the gate was once part of the fortress wall that was built around Seoul during the Joseon Dynasty.
Before it was demolished, the wall stretched 18 kilometers (11 miles) and stood 12 meters (39 feet) high. Along its course there were four large gates, including Namdaemun, originally called Sungryemun, and four smaller portals. Ten-and-a-half kilometers of the wall remain, mostly on mountains such as Bukak and Inwang. During the Japanese occupation, between 1910 and 1945, the wall gave way to roads and buildings in the name of urban planning. After independence, industrialization also took its toll.
The Cultural Heritage Administration and Seoul city have been restoring the wall since 1975. Recently, the administration found stone foundations underground, near the gate, and decided to dig out the soil to the original level, which is 1.6 meters below the current surface. It also found hinges of the original door. When the soil is removed, the gate will look grander.
The investigation on the gate’s foundations was part of the ongoing restoration to rebuild the wall on either side of the gate. 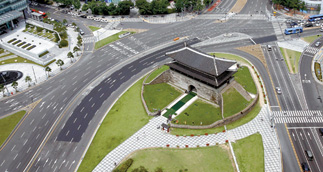 Namdaemun near the foot of Mount Nam. The gate was a part of the fortress wall that was buit to surround Seoul in the late 14th century. [JoongAng Photo]

“The general public doesn’t know how the gate was connected to the fortress and where the fortress wall existed,” said Lee Cheon-woo, an official at the administration. “The restoration is to revive our history.”
The project to rebuild the wall on either side of Namdaemun has been delayed indefinitely because the administration was afraid that if new stones were piled upon the stone foundations under the ground, they might crack. According to Go Byeong-nam, an employee at the administration, the restoration has been delayed until the time when Namdaemun is dismantled and rebuilt for repair.
“If the fortress wall is restored, it may well tell us 600 years of Joseon Dynasty history,” said Son Young-sik, a senior advisor to the administration.
The Nandaemun fortress wall was an example of a doseong, or a fortress that surrounds the capital (seong means castle or fortress, do means capital). It was built by King Taejo, the first king of the Joseon dynasty, in 1396, and later rebuilt by King Sejong, the fourth king.
Korea is a country of fortresses. The history of Korean fortresses dates back to the Gojoseon Dynasty (BC 2333 to BC 108), which was the first Korean kingdom. According to Mr. Son there are 1,900 fortress sites in South Korea alone and many more in the North.
“There were always fortresses in places of strategic importance,” Mr. Lee said.
Numerous fortresses were built during the Three Kingdoms period (early 4th century to mid 7th century) and they were expanded or rebuilt in later periods while new ones were added. When the power of a kingdom grew, they built new fortresses and expanded their territory by acquiring fortresses in the other two kingdoms. When they were in decline, they gave up fortresses and even had to move their capital.
There were different types of fortresses in Korea besides doseong, whose major functions were to protect royals and residents living inside them, to maintain the government’s power and to support administrative activities. Jangseong (jang means long) were built along the northern borderline, sanseong (san is mountain) along the mountain ridgeline and eupseong (eup means town) in the coastal areas and provincial regions. The most common type of fortresses in Korea is a sanseong because there are so many mountains. In the early Joseon Dynasty, there were 759 fortresses and 182 of them were sanseong.
Korean fortresses were built by taking advantage of geographical features such as mountain ridges or valleys. On the hill, it was possible to see the plains without high fortress walls or a watchtower. In case of doseong, over half of the fortress wall was built on mountains. Thus, Korean fortresses had no fixed shape, unlike Chinese castles that were square or Japanese castles that were built around a feudal lord’s residence. “Though it is difficult to make direct comparisons, buildings were independently constructed inside the fortress wall and people lived inside it,” Mr. Lee said.
The characteristics of Korean fortresses are due to cultural differences and the reason for building the fortresses.
“The fortress was built for residents to live in. So, in time of war, they could hold the fortress and resist their enemy,” said Mr. Son.
Most British castles, for example, were often equivalent to palaces and were built on flat land for the feudal lords who resided in them. However, in Korea the residents lived inside the fortresses so the fortress wall had to be long enough to accommodate the residents. 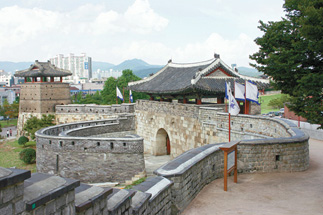 Hwaseo gate and watchtower at Hwaseong Fortress in Suwon, Gyeonggi province, a UNESCO World Cultural Heritage site. The fortress was built with brick and stones in the 18th century by King Jeonggo. Courtesy of Suwon Hwaseong Office

Mountains not only provided natural defense for Korean fortresses but also raw materials for construction such as granite, earth and wood. Granite was abundant and durable, and most fortresses that remain were made of it ― bricks were not used for building until the late 18th century.
One example is Hwaseong Fortress in Suwon, built by King Jeongjo in 1792. This fortress, a UNESCO World Cultural Heritage site, was built on Mount Paldal, with granite and brick. It is one of the few Korean fortresses built with bricks and its construction featured the first recorded use of a crane in Korea. After two devastating wars fought against the Japanese (1592-1598) and the Chinese Tsing Dynasty (1644-1911), Confucian scholars realized that they needed to upgrade Korea’s fortresses. Hwaseong Fortress was the result of their efforts.
The order to build fortresses were usually made by central or regional governments, but those who actually built them were peasants. They were mobilized in the winter and spring to avoid interrupting their work on farms. There were many casualties during such construction.
According to “Fortresses of Korea,” published by Daewonsa, about 322,400 men from all over the country were employed during King Sejong’s reign in the early Joseon Dynasty. All worked on Seoul’s doseong to rebuild with stone the parts that had been constructed with earth. In the process, 872 men died.
“People lost their lives through accidents, disease and malnutrition during the building process,” Mr. Son said.
Considering the number of existing fortress sites, the task of building the fortresses would have been enormous, especially when so many of them were built on mountain ridges. The fortresses were, however, built to protect the people from enemies. Korea has been in many wars throughout its history, with invasions by the Chinese from the north and by the Japanese from the south, and most of the key battles in history were fought around the fortresses. During those times the peasants were thankful that their ancestors had spilt their blood building such secure shelters.
“In time of war, people escaped to fortresses built on mountain ridges to protect themselves,” Mr. Son said. “Although people suffered to build the fortresses they could also seek refuge in them.”