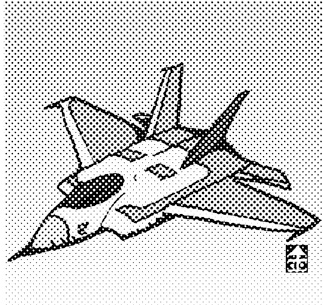 Aerial strikes in the modern era take place at a distance from their targets. Not only the enemy fighters, but also the friendly forces are located far away, outside the reach of visual confirmation. The jets have a range of many kilometers and are guided by radar that increases their scope of engagement. The image of fighter jets filling the skies in aerial battles against enemy planes is now something that can only be seen in movies depicting World War II.
With such a long range, these stealth fighters represent an upgrade. Countries with fighters that are undetectable by radar can dominate the battle to win control of the air space over a war zone. The principle of aerial battles, “first look, first shot, first kill,” is much easier to accomplish with a stealth fighter. No matter how strong your right hook is, what good will it do if your opponent in the boxing ring is an invisible man?
Of all the fighter jets that have been developed in our history, the U.S.-built F-22s, deployed in December 2005, are equipped with the most complete stealth function. From its material, design and exterior coating, the F-22 is the essence of Lockheed Martin’s best technologies. But the fighter earned its nickname, “Raptor,” from more than just its stealth function. The F-22 Raptor’s maximum speed is 2.4 times faster than the speed of sound. Even after its afterburner is turned off, it can reach up to Mach 1.7. It also has excellent maneuveribility.
The capabilities of its missiles and Vulcan cannons are also well above those of other fighter jets. Although none have been used in a real aerial battle, the results of a simulation in which one F-22 shot down five F-15s within three minutes, after engaging them simultaneously, are often quoted. The fighter has earned another nickname, “air dominance fighter,” and its capabilities certainly match that label.
The only weakness is its price tag. A single F-22 costs $120 million, three times more than an F-15. Japan’s Self Defense Forces have been appraising the plane, but the United States seems reluctant to sell it.
Twelve F-22s, which have never previously left U.S. territory, will be deployed to Okinawa, Japan for three months starting this week. A joint drill with the South Korean Air Force is also scheduled. The United States, on the eve of the resumption of the six-nation talks, has shown flexibility in negotiation, but it is also sending a strong message to the North that it must not have second thoughts. The nuclear talks must see substantial progress, so that Pyongyang will not have to worry about the deployment of F-22 Raptors.

The writer is a Tokyo correspondent for the JoongAng Ilbo.