Blizzard has to fight censors before beginning its crusade

Blizzard has to fight censors before beginning its crusade 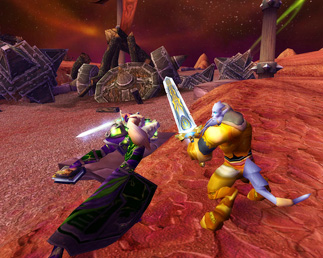 Warcraft characters battling each other Provided by the company

Blizzard Entertainment’s World of Warcraft: the Burning Crusade was finally released last Friday.
More commonly known as the “WoW expansion pack,” the game was originally scheduled to begin open service on the internet on Jan. 19, but the launch had been postponed indefinitely because it did not receive approval from the Game Rating Board. This board is a committee under the Culture Ministry and rates games before they are released, deciding whether or not young users can play them. On Jan. 31, the board finally decided to rate the game as suitable for ages 15 and up.
Not thinking that the game would fail to pass the rating board’s screening, Blizzard had begun distributing the game in offline form on Jan. 18. The game package, which contained the DVD client of the Korean version, the original soundtrack CD, and a 14-day user’s manual, was in a box-set and marked with “ages 15 and up.”
The Game Rating Board, however, asked Blizzard to retrieve all of the game packages that had been sent out. The sudden disappearance of the Burning Crusade package from store shelves as soon as they appeared on caused something of a uproar among game users, who bombarded both Blizzard and the Game Rating Board’s Web site with complaints.
Many game users criticized the Game Rating Board, saying they were delaying the release of Burning Crusade for no apparent reason, while some even speculated that the committee was deliberately giving Blizzard a hard time because it was a foreign firm. The board, however, denied the accusations and said that it was only going through the “normal” procedures, which require a certain number of days for the board to review the game and rate it. In a statement, the board claimed that it understood that players “really wanted to play the game as soon as possible” but that they were being very fair and transparent.
The Burning Crusade has been upgraded with two new character races ― the blood elf and the draenei― as well as more items and contents that cater specifically to the Asian market.
Blizzard is making sure that its new addition gets full attention. Late last month it set up a free demonstration zone at the COEX Megabox in Seoul and Haeundae Megabox in Busan.
These huge booths have large three-dimensional life-size blood elves and several computers that are placed in rows like PC rooms so that users can play the game (while standing up). These “demonstration” pavilions will be open until mid April.
Players who create a new account will be able to play the game for free until Monday midnight. The game client can be downloaded at worldofwarcraft.co.kr.