[DVD Review] This film’s irony ends with the title

[DVD Review] This film’s irony ends with the title 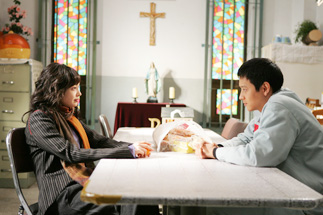 Song Hae-sung’s “Our Happy Time” is full of dialogue that sound like quotes from the British dramatist Oscar Wilde, although they seem to work better when they are used out of context. They are the kind of words that instantly grab your attention and you later find them on random blog sites when surfing the Internet.
They are phrases like: “A thorn is as small as a piece of a dust but it can be more painful than the universe when the wound is yours” and “My life was like living in hell, but now I want to live” and “I can take my secrets to the grave because I am a condemned criminal.”
They make great quotes, but, as with Oscar Wilde’s plays, they can disrupt the flow of a story.
“Our Happy Time” is an epigrammatic story and when it is not using striking quotes it pulls in just about every dramatic element that’s necessary to create a stimulating film. First it starts with a murder, than a man stricken with poverty, a suicidal woman, an abusive mother, a rape, love, repentance, an execution and so on.
The story, which is based on a best-selling novel, deals with two people who see themselves in each other even though they are different on the outside.
He’s a convicted murderer; she’s a rape victim. He is poor. She’s rich. But beyond their facades they are both facing a life in hell, trapped in their own guilt.
He is guilty of killing four people; she feels guilty that she was raped.
They are also facing death in their own ways. He is a facing the death penalty. She is so suicidal that she gulps down a whole bottle of sleeping pills in a car while she listens to the morning news.
Indeed Yu-jung (played by Lee Na-young) opens her heart to Yun-su (Kang Dong-won) for the first time when he shouts at her aunt, Sister Monica, at a prison meeting room, saying “Let me just die.”
The film is dramatic throughout, yet it is not overdone.
Indeed Song, the director of “Failan” and “Rikidozan,” seems to possess an exceptional gift for depicting cliched subject matter without making it seem dull. His use of straightforward dialogue also seems to work as well.
For example, when Yu-jung tells Yun-su for the first time about her rape by a cousin, she says, “I, Mun Yu-jung, was raped by a cousin at the age of fifteen. He had a wife and children. I was raped by my cousin. Bastard.”
On the other hand, the film is a classic drama that seems wedded to Catholic values: it tells the story of a sinner who comes to find repentance and deliverance through love.
The film’s plot has even impressed government officials. The prison scenes of the film have been supported by the state and they assisted the director when he needed to film inside a prison. (The film’s two lead actors became ambassadors for the rehabilitation programs at the prison where the film was shot.)
Yet unfortunately the film ends having only made slight mention of the subject of sin and salvation ― it doesn’t really deal with it in depth, although it deserves some credit for telling a fine story of two people who find a “miracle” through healing each other’s wounds.