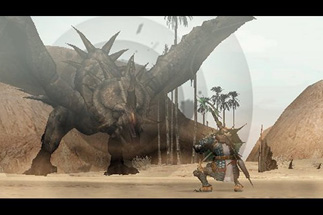 Nowadays with so many action games on the market, it’s pretty hard to find one that’s boring and inept. But “Monster Hunter Freedom” succeeded in being both.
Monster Hunter Freedom is the PlayStation Portable version of the PlayStation 2’s Monster Hunter G. The only difference is that the portable version does not have internet access, which allows other players to join the fun.
The story line is simple. The player is a hunter who hunts down monsters while traveling through a vast landscape. The player traverses swamps, jungles, mountains, deserts and rivers. There is no given character for the player to use.
The player can customize the monster hunter’s gender, height, face, eye-color, armor and types of exclamations. The hunter starts out with a simple dagger that is later upgraded to swords of various types, hammers, axes or bows every time a monster is defeated.
The game of hunting down monsters may sound interesting but Monster Hunter has failed to resolve the myriad of problems that afflicted the original PlayStation 2 version and made it annoying for players.
The absence of a lock-on system that helps players to automatically lock on targets for attacks easily makes a player frustrated.
This clumsy action makes the game cumbersome and unattractive. Also, the fact that the player can not switch to other weapons while battling monsters is another frustrating point. To change weapons the player has to go all the way back to the hunter’s cabin. This is a real disappointment, considering that many action games nowadays allow players to switch weapons or special fighting skills on the spot, as they are fighting.
In addition the clumsy camera angles forces the player to be constantly alert, which makes it tiresome. The player has to keep adjusting the camera angle. It would have been better if the camera had been fixed during attacks on the monsters. The best approach would have been to position it right behind the player’s character.
Other than slaying monsters, the game has a gathering mode. In this section the monster hunter has to gather stuff such as mushrooms or monster eggs. The hunter can also engage in activities such as fishing and farming that do not require any butchering.
The good thing about this game is that a player can kill numerous lizard-looking monsters with the weapons of his choice. Monster Hunter may sound intriguing, but there are far better adventure games on the market that allow players to slice and dice monsters.