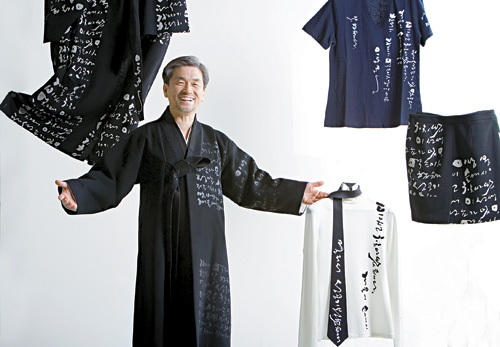 Jang Sa-ik showing clothes with his handwriting. By Kwan Hyouk-jae

A wooden sign in the Segeomjeong area of northern Seoul reads, “The utility bill of Hongjimun village is paid on the 25th of each month.” The style of calligraphy on the sign is elegant and controlled. It is the work of a singer, Jang Sa-ik, 58, who lives in the area. Mr. Jang’s calligraphic style, which has been enjoyed by his neighbors and friends, is now gaining wider popularity. The fashion designer Lee Sang-bong created clothes that incorporated Mr. Jang’s calligraphy. As the clothes became popular, Mr. Jang’s calligraphy became a hot topic of conversation, and that’s likely to continue when a mobile phone decorated with his script is released later this month.
Mr. Jang gives reporters a warm welcome. He is getting used to the publicity, although he finds it puzzling. “I don’t know what to talk about with regards to my handwriting. I am a singer ― calligraphy is just a hobby. You saw the wooden sign on the guard post? It was just for fun. The name Hongjimun village gives me a sentimental feeling,” Mr. Jang said.
“The letter I am writing right now is going to be enclosed with some money as a gift for a wedding. Actually, I don’t know the person who sent me the wedding invitation but I still think I should attend. When sending wedding invitations, people think over and over before they make their choice about who should be invited. The sender must have done that too. It is the right thing to go. I enjoy writing letters. I sent a letter to Lee Sang-bong too. Surprisingly, he printed my handwriting on his fabrics. I was so flattered.
“I was born in Sambong village, Gwangcheon-eup, South Chungcheong province. My parents were poor but they sent me to study in Seoul as I was the eldest son. When I was at Sunrin High School, I learned calligraphy.
“Some people know that my life has been difficult. Before I began my singing career at 47, I had done so many different jobs. I was an electronics salesman and a car mechanic. Maybe because I was restless, I was honest and worked really hard, but nothing really worked out. Sa in my given name means thoughts and ik means wings, so I think my thoughts just kept on flying to other places.
“When things didn’t work out, I started doing calligraphy with a paintbrush. I tried to imitate the handwriting or drawing of others. In the difficult life I had, it gave me some comfort, and suddenly I made up my mind. I had lived for 40 years and I felt like I had not lived my best life. I just ate and slept, and wandered around from one place to another, taking trains. I decided to live as fully as possible for three years. Then taepyeongso [a traditional wind instrument] came into my mind. I began learning instruments like danso [a short bamboo flute], piri [a pipe] and taepyeongso in 1980.
“Since 1993, I had struggled so hard and at last there was a way out. I won grand prizes for two straight years at the Jeonju Daesaseup Nori (traditional music and performance) competition. There were often parties after performances, and although I don’t drink alcohol much, I don’t mind socializing and I like to sing. I was called a party singer. My favorite songs were ‘Spring Rain’ and ‘Far Away.’ I sang ‘Innocence of a 19-year-old’ really well. Sometimes I sang an impromptu poem or melody of my own. The pianist Lim Dong-chang recommended that I record an album and then I became a professional singer.
“It was because of Kim Dae-hwan, a famous percussionist and a friend of mine, that I took an interest in calligraphy. He wrote the Banya Simgyeong, or Heart Sutra, all his life. Before he passed away in 2004 he called me and said, ‘Sa-ik, you should practice calligraphy. You and I did not learn calligraphy properly. We didn’t have a teacher or anything, but we did have freedom and that is an art in itself.’
“Since then, I began practicing calligraphy. I sang and when my singing career was not going so well, I began writing. When I got bored, I started singing again. That way a running style in my hangul [or Korean characters] began. In Chinese writing there are these cursive and grass styles, which look like a long piece of flying fabric. My dream is to write Korean characters in that fashion.
“It is amazing that calligraphy reveals a writer’s character. It even shows the features of his face. Those with a round face have round features in their writing, while those with a stubborn face have inflexible styles. It always reminds me of one thing; calligraphy reflects one’s heart.
“I am boundless and sometimes confused, and my style of writing is very sentimental. Perhaps I am too full of emotion.
“Handwriting is a good thing. Writing a letter and receiving a reply is fun. I use paintbrushes to write letters. It feels like they write themselves. There are blank spaces, and romantics say that sometimes a blank space tells more than words. I can just write, ‘How are you? It is good weather here and young buds sprout. Bye,’ and it is still great. When sending cards, writing one’s name delivers as much empathy as anything else.
“What if someone has bad handwriting? That’s not a problem. I have only one letter from my mother. To me the letter is the most beautiful thing in the world. The handwriting is terrible and the grammar is all wrong, but is there anything more valuable than a letter from one’s mother?
“Bad handwriting is more beautiful. A sincere letter from those who are less privileged or have little education can just carry me away. Having a lot of money does not mean living well. Writing is like that too. The charm of handwriting comes from making an effort and being cordial, not from trying to show off.” 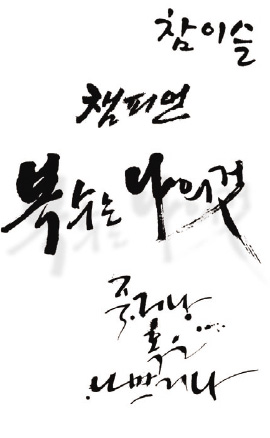 A soju brand by Sultong and the titles of films by Pilmuk.

Calligraphy is very popular, especially on movie posters and book covers. The word “calligraphy” in Korea is often used to describe commercial handwriting.
“Calligraphy is different from a computer font, which imitates handwriting. Calligraphy is unique to the person who holds the pen. Each style is unique,” said Kang Byeong-in, the head of Sultong, a calligraphy design firm. The sample of Jang Sa-ik’s handwriting that was used by designer Lee Sang-bong is this kind of calligraphy.
On the other hand, the rarity of handwriting is becoming more important and valuable. “As computer usage has increased, the effect and importance of manual work will become more significant,” said Jang Ung, a professor of advertising and communication at Suncheon Cheongam College.