[Overseas view]Be presidential in words, if not in deeds

[Overseas view]Be presidential in words, if not in deeds 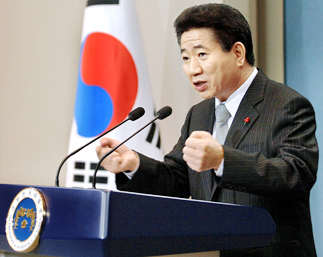 President Roh Moo-hyun makes a speech on Jan. 25 at the Blue House. [NEWSIS]

John Duffy is the chairman and chief executive of Keefe, Bruyette & Woods, Inc., a New York-based investment banking and brokerage firm. He had a terrible experience during the Sept. 11, 2001 terrorist attacks. When the twin towers of the World Trade Center in New York City were destroyed, he lost his son, Christopher, and 67 staff members. All of his company’s documents and property also disappeared in the rubble.
After the funerals, Mr. Duffy went into seclusion at home due to his immense shock and devastation. He planned to give up his company. Wall Street also thought that his firm was over. But some time later, Mr. Duffy changed his mind. He decided he should rebuild the company for the staff members victimized by terrorism.
He worked day and night in a makeshift office. Learning of this, surviving former colleagues visited him to help revive the company. The companies that had been his customers helped him too, and Keefe, Bruyette & Woods rose again. Its staff grew to double its pre-Sept. 11 size. Though he suffered serious financial difficulties immediately after the terrorist attacks, Mr. Duffy paid some $40 million to his company’s bereaved families. He continued to pay the salaries of the staff who lost their lives in the tragedy and supported their families in meeting medical and educational expenses.
On Jan. 31, U.S. President George W. Bush held up Mr. Duffy as an exemplary model of corporate responsibility in his “State of the Economy” report.
Mr. Bush said, “The United States is a country where there are an endless number of citizens . . . who overcome hardships to create new opportunities and carry out their responsibilities to the end. I am proud to be the president of this country.”
Dikembe Mutombo is a star player in the National Basketball Association. A Houston Rocket, he is not just good at playing basketball. He is also the best at doing good deeds. He established a foundation in 1997 to build hospitals in his homeland, the Congo. His contributions to the foundation reached tens of millions of dollars, including $15 million donated in April last year. In his “State of the Union” address to the U.S. Congress on Jan. 23, President Bush led the way in giving him a big hand.
In his speech, Mr. Bush also introduced Julie Aigner-Clark, a dedicated producer of educational videos for children’s development, and Wesley Autrey, who jumped down onto a subway track in New York to save a man who had fallen, even though a train was approaching.
Mr. Bush added, “We see the spirit of the United States in the acts of these courageous and virtuous people.”
The other content of Mr. Bush’s two addresses left room for controversy. But his remarks about Mr. Duffy and Mr. Mutombo were impressive enough to touch the hearts of the audience.
Heinrich Heine, a 19th-century German poet, said, “Words can call the dead out of the tomb and make a small man into a giant.” He also left a warning: “But they can also bury the living and knock a giant down.” In other words, the effect of words or speech makes a huge difference, depending on their content.
Mr. Bush’s introduction of “small heroes,” most of them unknown, inspires the public to acts of courage and altruism. His message aims to move hearts and turn people to “giants.”
In contrast, President Roh Moo-hyun’s state of the nation address to the National Assembly consistently praised himself and blamed others, thus hurting the people rather than moving their hearts. Mr. Roh’s remarks questioning how Nam Sang-gook, former president of Daewoo Engineering and Construction Co., could be involved in a bribery scandal despite his background of attending prestigious schools calls to mind Mr. Heine’s concerns about the violence of words, because Mr. Nam committed suicide afterward, in 2004. For political leaders who aspire to be the next president, which of the two speeches would you choose?


*The writer is the Washington correspondent of the JoongAng Ilbo.