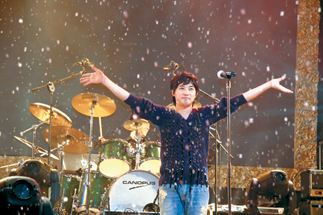 The festive atmosphere has been growing in Jeju, where tourists from Taiwan, Hong Kong and Japan have been crowding the island’s resorts every weekend to see their favorite hallyu (Korean cultural wave) stars.
The island has been hosting the Hallyu Expo, which has featured a variety of celebrity-filled events for over two months now, making it the longest-running hallyu festival to take place in Korea. The event was heavily marketed in foreign countries. The excitement was at its peak the previous weekend, which featured actors such as Ahn Jae-wook, Kim Rae-won and Lee Dong-gun, all of whom enjoyed wild greetings from the thousands of female fans who followed them around.
On Sunday, hundreds of tourists queued to see Mr. Ahn, the star of the television drama “Star in My Heart,” which put him in the major league of hallyu celebrities. He also sang the title song for that drama. Over 700,000 copies of the original soundtrack album were sold outside of Korea.
Tourists chanted, “Asian Prince” as Mr. Ahn descended an escalator in the Tamra Hall at the Jeju International Convention Center where his concert took place. Over 1,200 people filled the concert hall, a majority of them from Japan and China. Ahn also took part in a hand printing ceremony. He visited the “Star Village” where an Ahn Jae-wook booth was located. 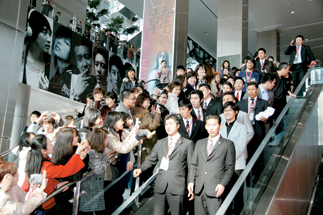 Descending an escalator to screams of “Asian Prince.” Provided by Hallyu Expo

Just a day before, Kim Rae-won had made a grand appearance on the island to hold a meeting with his fans. His Japanese fans call him “Wonsama,” a name coined to show their affection for their favorite Korean actor ― they have done the same with Bae Yong-joon, whom they call “Yonsama.”
Along with Japanese fans others from China, Taiwan, Hong Kong and Russia joined in the “Wonsama” chant as he went on stage to sing as a token of appreciation toward his international fans.
“I can usually sing better, but I am afraid my voice is a little shaky because I am really nervous now to stand in front of so many hallyu fans,” he said after he finished singing the title song of “Sunflower,” one of the dramas he appeared in.
“I thank all of you who came from so far to meet me,” he continued. “I hope that we can all have fun together tonight.”
Just then, a loud shout came from the audience.
“I came from Hong Kong to see you!” said a woman who had stood up to wave. Kim gave her a thumb-ups and waved back, making the mostly female fans shriek with delight.
But he heard cries of disappointment when he said he “had to kiss” actress Kim Tae-hee several times during the shooting of “Love Story in Harvard” because the director needed more than one take.
“I am not at all like Gyeong-min in Attic Cat he said, referring to his role as a mischievous college student who ends up cohabiting with a girl by accident. That drama was also a hit with female fans. “I am usually quiet, but when I am acting I try to understand the character more. I have been taking a break and traveling since the filming for ‘Sunflower’ ended,” he said, explaining that the Hallyu Expo was his first official public appearance of the year. “But I am coming back to the small screen next month with a new drama.”
He will be starring in “Sikgaek,” a television drama based on a popular Korean comic book about an epicure who challenges himself to cook dishes from every cuisine in the world.
The Hallyu Expo is expected to run until March 10. For the finale, Bae Yong-soon will appear. Others attending the event are Lee Young-ae, Song Seung-hun, Lee Jung-hyun, Lee Jun-ki, TVXQ, BoA, Kangta, Super Junior and Kim Hee-seon.
Event organizers said they expect over 50,000 foreign visitors and 100,000 Korean tourists to visit Jeju during the event’s run. Flight to Jeju are mostly sold out, and 90 percent of hotel rooms near the event venues are booked.