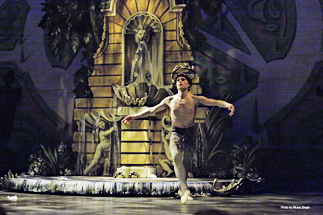 A scene from ‘Acteon,’ by French composer Marc-Antoine Charpentier, being staged by Opera Atelier. Acteon is turned into a stag by the goddess of hunting, Diana, and is killed by his hounds. Provided by Opera Atelier

Two Baroque operas, “Acteon” by Marc-Antoine Charpentier and “Dido and Aeneas” by Henry Purcell, will be staged in Seoul today and tomorrow, in their original form. The operas, first performed in the 17th century, will use early instruments, elaborate costumes and stage decoration, as well as acting and dance styles consistent with the 17th century. Both operas will be performed on Friday and Saturday at Seoul Arts Center in southern Seoul.

Founded in 1985 by Marshall Pynkoski, the Canada-based Opera Atelier, responsible for the weekend performances, specializes in operas, ballets and dramas from the 17th and 18th centuries. This is the opera company’s second visit to Korea, after performing “Don Giovanni” in 2003.
The company researched Baroque operas in order to accurately recreate them. It adopted original instrumentation, singing techniques and use of rhetorical gesture. It also employed 17th century choreography, stage illumination, costumes and makeup.
Opera Atelier has staged 25 17th and 18th century pieces by Monteverdi, Mozart and Lully. Its 2000 production of Lully’s Persee, which had not been performed since the 18th century, was praised as “the operatic event of the year,” by the Toronto Star. Since 1995, the company has been regularly invited to perform by the Houston Grand Opera and the Cleveland Opera.
Opera Atelier’s intent is not to recreate a particular historical performance but to use 17th and 18th century stagecraft and aesthetics in a way that makes them suitable for modern audiences.
“I don’t like to use words like ‘authenticity’ and ‘recreation,’” Mr. Pynkoski said in a press meeting last week. “That is not our goal. Baroque opera is a fully realized art form, and I think it can be modernized with great success.” 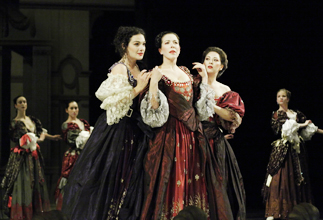 A scene from “Dido and Aeneas.” Dido is abandoned by Aeneas and kills herself.

“Acteon,” which premiered in Paris in early 1680s, is about the fate of Acteon from Greek mythology. A hunter, Acteon accidentally discovers the goddess Diana bathing with her attendants. Diana turns him into a stag, which is then killed by Acteon’s own hounds. The story for “Dido and Aeneas” is a partial adaptation from “Aeneid” by the Roman poet Virgil. Dido, Queen of Carthage, falls in love with Aeneas, a Trojan hero who later helps found Rome, after he is shipwrecked in her country. The two are happy until some witches remind Aeneas that his fate is to be the founder of the Roman Empire. He leaves Dido, who, heartbroken, kills herself.
“Acteon” will be performed first, in French (38 minutes), with Korean subtitles. After the intermission, “Dido and Aeneas” will follow in English (61 minutes), with Korean subtitles.