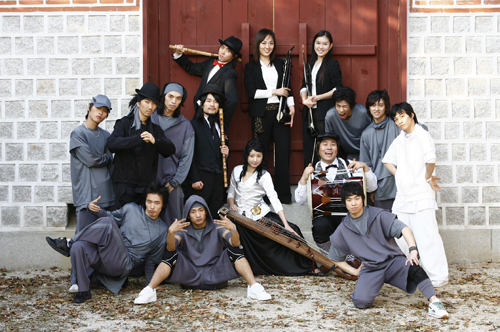 The dancers and musicians from ‘B-Boy Korea.’ Provided by PMC Production

Those who enjoy watching b-boys jump and twirl to heart pounding hip-hop beats will want to see “B-Boy Korea.”
In recent years, Korean b-boys have dominated the world scene with their hardcore dance moves. “B-Boy Korea” takes it a step further by fusing hip-hop dance with traditional Korean music, something that hasn’t been done before.
The live musical was created by PMC Production, the entertainment company responsible for widely popular musicals as “Nanta” and “Tokebi Storm.”
The basic storyline is the long-time rivalry between a legendary b-boy, Black Point, and his nemesis, Yabi. The two participate in a dance battle, which Black Point loses after he sustains a serious injury at Yabi’s hands.
Black Point, who can no longer dance, wanders aimlessly until he finds a new life as a traditional flute player. He enjoys this until he witnesses a quarrel between two b-boy teams, 3B and Yabi’s crew, YB Team. As the teams prepare to engage in a dance battle, Yabi notices his old rival and exposes Black Point’s identity. The 3B team asks Black Point to teach them his moves and the former b-boy dancer accepts.
The choreography for “B-Boy Korea” is by the famous Korean b-boy master Nam Hyeon-joon, also known by his nickname, “Poppin Hyeonjoon.” Mr. Nam has appeared in K-pop music videos and choreographed stage performances for Korean singers, including JTL and SES.
Previous works by the musical’s composer, Lee Dong-joon, include Korean blockbusters such as “Joint Security Area JSA,” and “Taegukgi Hwinalrimyeo,” also known as “Brotherhood.”