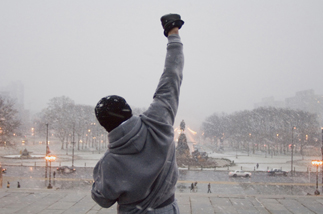 The real-life statue that once graced Philadelphia City Hall may be gone, but Rocky (Sylvester Stallone) celebrating there is still an iconic cinematic image.

The first “Rocky” film set a standard that would eventually become a genre formula. Though hokey in retrospect, it was genuinely inspiring, and had a truly emotional twist for an ending.
Unfortunately, there were four more “Rocky” films after that, each more ridiculous than the one before it. Seventeen years have passed and Sylvester Stallone ― who directs, writes, produces and stars ― has decided it’s time for one last hurrah for the Philadelphia fighter. The movie’s title reflects its intended break with previous sequels ― “Rocky Balboa.”
On the whole, it’s a good decision. The new film is a return to the premise that made the original so inspiring ― its spotlight on the search for meaning in the lives of the down-and-out of Philadelphia.
In the present day, Rocky’s a local celebrity, running an Italian restaurant and telling old fight stories to his patrons. But in the wake of his wife’s death Rocky finds his life wanting. His son is a bit of a wiener, and Paulie (Burt Young), his faithful coach, is tired of retreading the past with him.
He fills that hole the only way he knows how ― by returning to the ring despite his old age. A computer simulation of a fight between Rocky and the current heavyweight champion Mason Dixon (Antonio Tarver) shows Rocky on top, and the two sign a deal to play out the match for real.
In his corner are Paulie, Duke (Tony Burton) and Marie, a single mother who lives with her biracial son (James Francis Kelly III) in an abandoned apartment building. Marie is played with grace and complexity by Geraldine Hughes.
Rocky’s undefeated opponent is treated not as a demon but as an untested young fighter looking for soul and struggle in a life that’s been handed to him on a silver platter. The fight is a lesson from an older generation, not a contest between protagonist and antagonist.
A tour of the places Rocky took his deceased wife is a touching elegy about the speed of urban change, and it reminds me that Stallone really can act. He’s had so much time to work with this character that Rocky’s lines flow very realistically, almost spontaneously.
Of course, the training montage is here, the mainstay of the franchise. It truly is incredible to see the shape Stallone has kept himself in at age 60. The fight itself is exciting enough, though it’s far too brief and almost seems an afterthought.
That’s because this is more a melodrama than a boxing flick, and “Rocky Balboa,” though much more effective than its immediate predecessors, may take itself too seriously.
Just as the first “Rocky” did, boxing films like “Million Dollar Baby” and “Cinderella Man” have recently raised the bar for the genre, and the standard of meaningful drama is just a bit higher than “Rocky Balboa” can reach.
But “Rocky” still has something those films don’t (besides a better theme song) ― it’s an American institution, emphasized by the footage of people from all walks of life re-enacting Rocky’s leaps on the steps of the Philadelphia Museum of Art that accompanies the credits. Though it may not be flashy or deep, it’s a fitting denouement for a character that inspired a nation.