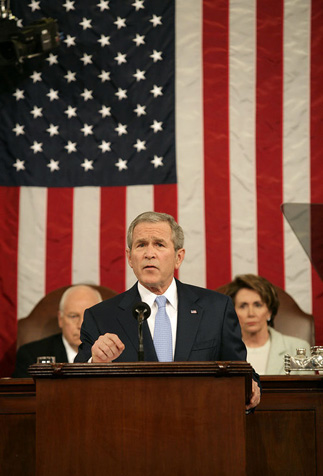 President George W. Bush took center stage in the U.S. Congress to deliver his latest State of the Union address, but he was quickly overshadowed with regard to Iraq by other leaders.
In this TV age, the conspicuous Nancy Pelosi, who sat just behind the presidential podium during the Bush speech, has been prominent in media commentaries. There is nothing inappropriate about this; she is the first female to observe a president from that position. She is also the most visible symbol of the Democrats’ return to power in both houses of Congress.
The president’s speech emphasized foreign policy. Speaker Pelosi did not make the Democrats’ formal response. She is not generally regarded as an international expert. Rather three male voices, from different perspectives, critiqued Bush’s Iraq policy ― or lack thereof.
While U.S. foreign policy was emphasized in the speech, the perspective was hardly comprehensive.
President Bush addressed global themes in his emphasis on international terrorism. In these remarks, characteristically, he lumped together religious strife in Iraq, the growth of fundamentalism in Iran, the Israeli-Palestinian conflict and al Qaeda. This certainly simplifies the analysis ― there is none ― but is a dangerous path for policy.
In Asia, American security interests are well established, and have deep historical roots. Its economic involvement is also growing rapidly and not just with China. Al Qaeda is also active in this part of the world, especially in Southeast Asia. One consequence of an emphasis on international terrorism that does not address the wider economic, political and security context is the impression given to both allies and adversaries of the U.S. that the Bush administration suffers from tunnel vision, at least in these final years in office.
Immediately after the State of the Union address, remarks by Lt. Gen. David Petraeus, Senator Chuck Hagel and Senator James Webb drew considerable attention and had substantial impact, in ways that undercut the stance of the Bush administration regarding Iraq.
As the critical media were quick to emphasize, Congress did not respond with widespread applause when the president said he wants to send more troops to Iraq. The loaded word “escalation,” reminiscent of measures taken during the Vietnam War, has been used by critics before and was firmly rejected by Secretary of State Condoleezza Rice.
The president seemed defiant in reminding legislators that they had supported the invasion of Iraq and that the American people had not voted for “failure.” In reality, White House intelligence was wrong and now historical hatred rooted in religion has exploded in Iraq. In this context, a belligerent Bush bashing al Qaeda appears self-serving and unrealistic.
General Petraeus, by contrast, appeared realistic in his testimony before the Senate Armed Services Committee. He described the Iraq situation as “dire” and success “neither quick nor easy.” The unanimous confirmation vote by the Senate reflects his skill as well as professional standing; Senator Ted Kennedy, a leading war critic, made his intention to vote for Petraeus known well in advance.
Petraeus’ notably successful confirmation conveys important lessons. First, bipartisanship is not dead. The FDR and Truman administrations were able to develop an internationalist consensus that included both parties, personified by the Vandenberg Resolution. The Korean War as well as the Marshall Plan and NATO institutionalized this engagement within the wider world. The current Congress has an opportunity, in the context of Iraq policy, to cooperate across party lines. Second, Congress will become increasingly important to those, at home and overseas, who desire to change the current foreign policy direction.
Senator Hagel, a Republican and Vietnam War combat veteran, joined Democrats on the Senate Foreign Relations Committee in carrying a resolution against increasing troop numbers in Iraq. Hagel has become outspoken in his condemnation of the war. He said that stepping up the war effort was like sending young men and women into a “grinder”. That term also recalls Vietnam.
Senator Webb, previously a Republican who served in the Pentagon under Reagan, is also a Vietnam combat veteran. In a brilliant Democratic response to the State of the Union address, he evoked two Republican presidents, describing the reforming zeal of Theodore Roosevelt and the national security skills of Dwight Eisenhower. He accused Bush of departing disastrously from his party’s history. Polls show Democrats now lead Republicans with the public in every policy area except national security. For Democratic leaders to defer to a newcomer such as Webb to make their rejoinder implies a keen awareness of this reality.
Democrats, however, remain a long way from regaining the White House. On Iraq, most of the telling criticism is coming from outside their party.

*The writer is the Clausen Distinguished Professor at Carthage College in Wisconsin and author of “After the Cold War”(NYU Press and Palgrave/Macmillan; Korean language ed. Oruem Publishing). He can be reached at acyr@carthage.edu.