Where pop stars go to fade away

Where pop stars go to fade away 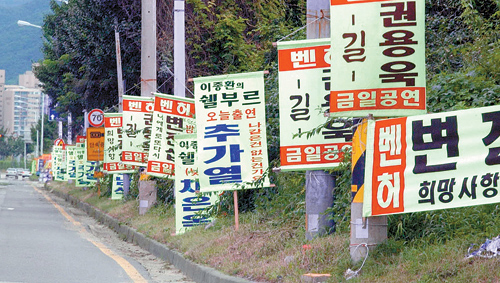 The names of the cafes in Misari suggest that visitors to the area all want to be somewhere else. One is called Rome and then there’s Cherbourg and Athens. People don’t come here to be in a suburb of Seoul. They come to visit another country, one where their everyday worries cannot follow them. Many Koreans come to Misari as a spontaneous escape from an unglamorous reality.
“People want to put their lives behind them and soak themselves in a nostalgic past when they come out here,” says Lee Chung-gi, who ran a live cafe in the neighborhood for 10 years. “It’s a vacation for them, in a way, to improve their spirits with beer and old pop songs. Often they drive out here after work as an alternative to taking a long trip.”

From Seoul, it takes more than 12 hours to fly to Rome, but the Misari version of the eternal city is just one- and-a-half hours from Seoul City Hall, traffic permitting. During its heyday in the early ’90s, the place had over 50 live cafes of varying size. The music that was played most frequently included old pop songs, mostly folk, by Korean musicians who disappeared from the spotlight after having a few hits during the ’70s and ’80s. Some made a good life in Misari singing the one-hit-wonder that took them to the top of the Korean music chart 20, or even 30 years ago.
Misari started out as a street full of restaurants and coffee shops. It quickly became a popular dating spot for couples because the live music cafes in the neighborhood stayed open late at night.
Unfortunately, its fame did not last long.
Nowadays, less than ten live cafes are left in Misari. That’s a dramatic contrast from its heyday, when the place was dubbed the cultural valley for “7080,” the generation who were in their youth during the ’70s and ’80s. Even the remaining 7080 cafes in the area are slowly turning into bars or clubs, changing from live performances with acoustic guitars to louder music with more electric amplification.
Some blame the lagging economy. But most cafe owners in the neighborhood cite the rising fees demanded by the singers, who are increasingly younger musicians who have been pushed out of the mainstream as a consequence of the rapid trend shifts that characterize the Korean music scene . To attract attention, the scale of the cafes has been expanded from small halls with about 30 seats to palatial entities, some spread over three levels.
“You can’t argue with the public’s idea of fame and spectacle when the competition becomes fierce,” says Mr. Lee, who closed down his live cafe in December. “When singers end up here nowadays, their cost is strictly controlled by the scale and impact of their television appearances. It’s very different from the past when folk singers from the ’80s took the stage simply because they appreciated that there were still places left for them to sing. Now it doesn’t matter whether you sing trot or disco as long as you sell.” 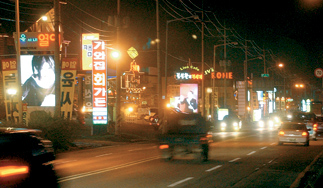 The main street of Misari where there were once 50 live music cafes. Now 9 survive with bigger stars and higher prices. [ JoonAng Ilbo]

Others cite the way the neighborhood’s reputation has slid downmarket, so that it is now regarded as a sleazy place where extra-marital affairs are consummated in the ever rising number of love hotels. That, and the many late-night businesses of dubious character give the impression that the place is a lewd spot for secret affairs. There is also the inevitable feeling that Misari is for musicians who are on the skids.
One visitor to Misari recently posted a note on an Internet portal site after watching his favorite musician from his childhood perform. His tone was downbeat, his desire for nostalgia having been overwhelmed by reality. “When she showed up on stage after about an hour, she explained that she was late because her child was really sick. Here was a star who had the best charisma ever at her peak. But now she is a single mother trying to make a living. That was when I really felt sorry.”
Still, Misari is a rare place where people can listen to live music all year around until 4 or 5 a.m.
When shows begin in the early evening, disco balls twirl above the stage and cocktails are served at tables where customers can make requests. The atmosphere is far from posh.
Like the music, the decor is reminiscent of urban coffee shops from over 20 years ago. To this day they serve bland filtered coffee that tastes like tea. When you order a dinner set it comes with a bowl of rice and canned nectarines, a combination that was typical of Western-style restaurants in Korea during the ‘80s.
The singers rotate every hour in the manner of a mini-concert. During off-peak hours the cafes feature low-profile singers who sing old pop songs and the latest hits of famous musicians. By the peak of the evening, around 9 or 10 p.m., most of the cafes are almost full. On weekends, when some of the cafes’ highest-paid entertainers show up, people can be found waiting in line.
“I believe this place has not died yet,” says Han Seung-gi, a folk singer who made his name in the late ’80s. Han began singing here 12 years ago.
“I am not sure whether it can survive another five years, but I still consider myself a popular singer. I sing folk songs, and this is the place to be.”
Lee Mi-jeong, a 26-year old office worker, is a Misari fan.
“It’s a place I think of when my life seems too hectic,” she says. “It’s tacky, but there is something very warm about Misari.”
While the neighborhood is known as a kind of retirement community for former stars, it’s also a place where stars are born. Fan clubs for musicians who have never released a single album have been set up through the Misari stages.
Park Gang-sung, who is dubbed “the king of live music” at Misari, is one musician who began doing national tours after making his debut here 23 years ago.
At 45, Mr. Park’s fan club currently has about 5000 members. Most of them are middle-aged women who are fans of his ballads. During the last six years, which have been the most successful of his career, he’s released seven albums and performed a series of well-received concerts across the nation.
“You can’t just draw a narrow conclusion that there is no demand for good music among people who are over 40,” says Oh Jun-Ah, the manager of Yun Si-nae, who had numerous hit songs in the ’80s. like “Dear DJ.” (Ms. Yun regularly performs at Misari and has been doing so for about eight years.) “There should be a place for older musicians, and Misari is certainly fulfilling that purpose, and it should continue to do so.”