Every piece of tteok is a history lesson

Every piece of tteok is a history lesson 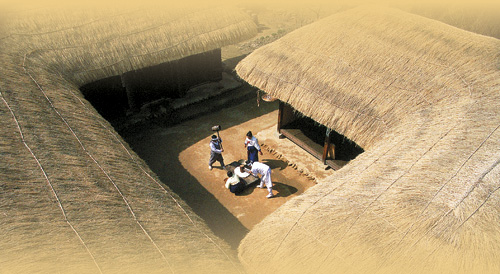 “This is black sesame injeolmi,” said Ko Juran, holding up a piece of glistening tteok (rice cake). “It is popular throughout the year.”
Ms. Ko, a principal researcher at the Institute for Asian Women, made the tteok during a three hour class that she is taking along with 19 other women.
“The class lasts for 14 weeks and we make one glutinous tteok, one non-glutinous and a traditional tea,” said Ms. Ko. “I love learning about the many diverse kinds of tteok.” 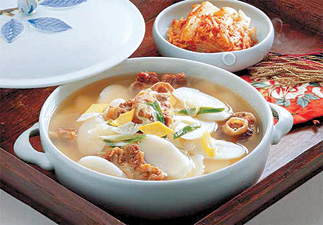 Tteokguk, or rice cake soup is eaten on New Year’s Day in Korea

The course is one of several that take place each week across Seoul. As the country prepares to celebrate the lunar new year on Sunday, mounds of tteok will be prepared across Korea. Tteokguk, a soup with small non-glutinous rice cakes will be savored by millions, just as songpyeon tteok is eaten at Chuseok (Thanksgiving Day).
“I think tteok should inspire us,” said Ms. Ko. “It shows how creative our ancestors were, to make such a range of items from our main food ingredient. They turned rice into an art form.”
Ms. Ko is taking the tteok course as a hobby but she would also like to run a tteok business one day, a dream she shares with most of her classmates. Their passion for tteok is part of a national revival of interest in rice cake making, which is fed by a renewed interest in tradition among men and women in their 30s.
“Our ancestors imbued tteok with all the values of pungsok (the Korean way of life),” said Ms. Ko. “The qualities of order, of stability, of harmony, they are all there in every tteok recipe.”

A grain of rice is so simple. The monochromatic coloring of its shell protects a tiny piece of white starch. And yet it is so much more. Korea’s history could be written in rice. When its rice farmers have prospered, so has the nation. And when Korea has prospered, its rice farmers have done well.
Tteok has been an integral part of this process. The three-thousand-year-old Dangun legend ― in which a bear turns into a beautiful woman, Ungnyeo, who marries a divine spirit, Hwanung, and then gives birth to Dangun, a god-man who created the Korean nation ― has a reference to mugwort, an herb that is used in many different types of tteok.
One of these is “legend tteok” a speciality of Yoon Sook-ja, Korea’s empress of tteok, who, as director of the Institute of Traditional Korean Food, has done more than anybody to maintain the rich traditions of tteok manufacture. Her book, “Tteok Snacks and Beverages of Korea ― the Taste and Style of Tradition” is a bestseller.
“Tteok is the next best food after kimchi to represent Korea,” said Ms. Yoon. “Tteok is made from the most nutritious ingredients, such as glutinous rice, beans, nuts, vegetables, fruit and even herbal ingredients used in Chinese medicine.” 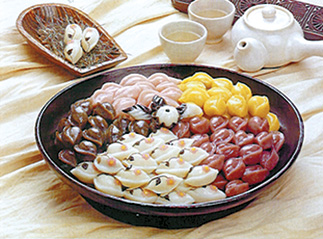 Rice was first cultivated in Korea around 3,500 B.C., but it was not widespread. Rice cultivation on a large scale and its use as a food stuff does not appear in archeological records until after 1,500 B.C.
References to tteok begin to appear around 500 B.C. Several books that describe wars involving China and Korea that took place between 480 B.C. and 222 B.C. mention tteok being used as a ceremonial food.
One account describes rice being washed, then pounded into a powder and then mixed with water before being shaped into cakes to be steamed. According to the Institute of Korean Royal Cuisine, tteok at this time was often mixed with flowers to provide natural color and herbs to convey a medicinal effect.
Essentially the same techniques have been used throughout tteok’s history. Ancient descriptions of medical practice from the early Joseon dynasty say that tteok should be eaten for strength before any physical activity, for reinvigoration after exertion and for recuperation after illness.
During the Three Kingdoms era (Goguryeo, Silla and Baekje), which lasted until 936, rice cultivation spread, but it was around 1200, during the Goryeo dynasty, that rice culture began to enter an accelerated period of development, as Korea embraced Buddhism, which forbids the consumption of animals. 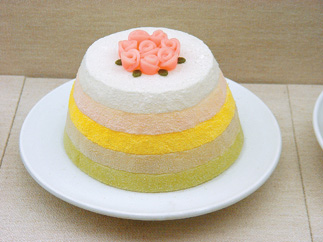 Prior to the Goryeo dynasty, tteok had been a luxury food, with most rice cakes manufactured in small quantities in the kitchens of the nobility. With the ascendancy of Buddhism, rice became a universal staple and tteok recipes begin to turn up in more plebian places. Not that the tteok was always made of rice. When harvests were poor, or when one of the many wars of the era interrupted agriculture, substitutes such as millet were used.
When rice production returned to normal levels, the substitutes often remained in the recipes and this is one factor that has led to the diversity of tteok through the centuries. Another is the use of tteok in ceremonies, both to remember and honor ancestors and to mark events, such as a marriage or the birth of a child.
During the Joseon dynasty, tteok manufacture hit its apex. Records show that at the beginning of the dynasty in 1392, there were eight kinds of tteok made by three different methods. By 1670 the number of tteok varieties had risen to 27. And, according to Ms. Yoon, by 1815 there were 198 types of tteok, cooked using more than a dozen different methods and involving over 95 different ingredients.
As tteok culture flowered, its use in ceremonies became widespread. Bongchaetteok (wedding tteok) was developed in the 17th century and it is still served today. It is offered to the bride’s family when they receive gifts and the letter of proposal from the groom’s side. It is made with three measures of glutinous rice to one measure of red beans. The ingredients are placed in separate layers in a steamer, with the beans forming a topping upon which are placed seven jujubes in a circle.
The chest with the wedding gifts is placed on top of the steamer and opened, after the family has bowed twice to the north. The seven jujubes represent good luck and the wish that the bride will have seven sons.

Westerners often say they don’t like tteok because it is too chewy, especially the glutinous variety. The popularity of tteok among Koreans has also declined, a trend that began with the Japanese conquest, which saw Western style cakes introduced to Korea.
Every new branch of the ubiquitous Paris Baguette is another nail in the coffin of tteok culture.
But the tide may be turning. Tteok’s main virtue is that it is undeniably healthy. Made with the right ingredients it can be like a symphony for the tongue, each element of taste, such as jujube and mushroom, singing its own part. And now that Ms. Yoon has patented a way to preserve tteok outside of a refrigerator for more than three months, tteok may finally be ready for mass export to Western countries.
“I dream of a time when, for the sake of our nation’s health, tteok becomes a substitute for Western cakes and cookies,” said Ms. Ko. “Then we can get back our tradition of caring for our poongsok, eating tteok as our ancestors did, sharing it with our neighbors, colleagues and family whenever we have some happy news.”
And that is why tteok is a treasure of Korea. The humble rice cake rose to become a work of art, embodying in beautiful shapes and colors all the traditions of the Korean spirit. The decline of its popularity, some say, mirrors the decline of civility in Korean society, as the disposable values of the West became more influential.
“What is a cookie?” said Ms. Ko. “Sugar and empty calories ― but every time we eat tteok we partake in our nation’s traditions and sustain our health. It takes discipline to make tteok, and to build a nation. That is why every piece of tteok is a lesson in history and politics.”