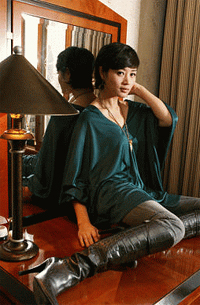 It seems like Kim Hye-soo is finally walking into the spotlight. For the last 21 years she has been a mellow actress who was rarely cast in the most challenging roles. But now she may be finally getting an opportunity to show her full potential. And, at 37, Ms. Kim appears to have entered the second act of her career.
She showed she can act in “War of Flower,” in which she played a gambling ace with a beautiful naked back that revealed curves enough to entice over 7 million viewers. Coming up in a few weeks she will turn herself into a housewife who secretly dates a college student in director Jang Mun-il’s “A Day for an Affair.” She will also play an unaffected aunt in Jeong Yoon-cheol’s “Shim’s Family” and a prostitute in Kim Jin-seong’s “Eleventh Mother.”
Each of the characters are very different and will require some dynamic acting that will test Ms. Kim’s range. Of course, a reporter never makes pleasant comments. I pointed out that she had never been in a film (except for “War of Flower”) that allowed her to show off her best. Her answer was simple and to the point: “It would have been nice to have a film that represents me at my best, but it’s not an actor’s choice to stand out or blend in with a film. An actor just acts according to the role she is given.” And that is how Ms. Kim is, an unassuming actor with more talent than the films on her resume suggest. It will be good to see more of her work, now that she is getting the roles she deserves.
Q. All three of your forthcoming films sound interesting.
A. I was lucky last year. I worked on four big projects, including “War of Flower.” I don’t think the director had me in mind for “Shim’s Family,” but I liked Mr. Jeong’s ingenuousness and his unique style with the script. It’s a small role, but everyone in the film has a small role and each one plays their part. I wanted to be involved in that process.
As for “Eleventh Mother,” I volunteered to appear in it after I read the screenplay during the filming of “War of Flower.” It was a sad story without forcing anyone to cry. I play a woman who has never been in love but feels great affection toward a small child. To be frank, a lot of people told me that I don’t suit the character, only because the woman has to be fragile and weak, something people cannot imagine me being.

“A Day for an Affair” does not show much skin. It unfolds into a sex comedy with lots of talking. It is also amusing that women who have affairs do not have unhappy endings. Have you heard any criticisms about that?
Let’s not view this movie as the story of a bad housewife who has an illegitimate liaison. It’s about the break away of two women who went a notch higher than women normally go in love. The two women in the film turned into more relaxed and mature women after their affair. If the screenplay portrayed them as cynical figures, I would have had second thoughts about working in this film. [About the criticism] I think it’s the audience’s choice whether they like the film’s conclusion or not.

Again in this film, you seduce a younger man. You have a sensual image that suggests you are bold and sexy.
I can’t be bold and sexy. I try to be bold when I am working. But when I am in front of a man [in real life], I might not be quite so bold.
I think the casting in “A Day for an Affair” pretty much suits everyone’s actual characters, though, in the sense that each actor brought out their own special charms. The director did a fine job of pulling those characters out of us.

I heard you have gone through ups and downs in real life.
No. I moved out of my parent’s home in my mid-20s only because I was afraid that I would become an idiot if I lived with a family who did everything for their star daughter. I paid my own bills, ran errands at district offices, invested in stocks and blew the whole thing off. It was something anyone at that age would have gone through.
And, yes, I did not go to high school. But I went to college and on to graduate school to learn what I wanted to learn later on. I believe it’s more important how an actor remembers their experience than how much experience they accumulate. My life has been smooth, but I had a tough time trying to remember the experiences I have been through.