[TV Review]In the White Tower, all you need is power

[TV Review]In the White Tower, all you need is power 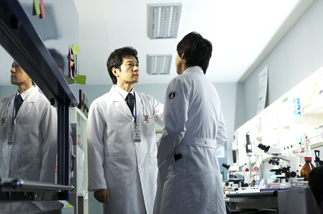 A scene from ”The White Tower” [MBC-TV]

The producers of Korean TV dramas seem to be prisoners handcuffed by the love story. Whatever they do, it seems they can never be free of those sweet shackles. Actually, they seem to be comfortable in their confinement. They seem to think they are safe as long as they don’t have too much creative freedom. I have often wondered why so many roles must have all the ingredients of a love affair. The favorites seem to be love triangles and Cinderella tales, so much so that in most dramas there is a generous platter of love triangles with the occasional love hexagon for variety. Recently, though, I have been pleasantly surprised to find some interesting medical dramas that have excluded the love story. “The White Tower” on MBC-TV is a notable example.
My sister, a medical doctor herself, heaps scorn on medical dramas for not matching the realities of hospital life, but hey, it’s just TV. If these dramas were made like a grim documentary I think they would soon have no audience. The focus of “The White Tower” is the power games that doctors play. These games are played in every workplace, but a hospital is the ideal place for a TV drama because it has life, death and clever doctors. I mean, politics is not restricted to the National Assembly. Politics occurs whenever there are two living creatures; it occurs between parents and children, at work and between two people in love. Politics between a couple? Of course, because there is usually an imbalance of power and the person who loves less takes control of the relationship. This world is an unfair place anyway and there are power struggles everywhere. The Beatles may sing about only needing love, but that’s just a pop song. In reality, for success and money, all you need is power.
Doctor Jang Jun-hyeok in “The White Tower” is very aware that he wants success and, to achieve it, he needs power. He is a cold-blooded and ingenious surgeon who is ready to do anything to succeed, including engineering a loveless marriage with the daughter of a powerful figure at his university hospital. Dr. Jang is a traditional evil character, but what the drama is trying to depict is not the conventional dichotomy between good and evil. The drama explores the realities of human society as it is and lets the viewers see how the power game plays itself out.
Naturally, there is no room for pathetic love stories in “The White Tower,” whereas another medical drama, “Bong Dal-hui, the Surgeon” is more hackneyed, complete with love triangles that happen to take place at a hospital. Furthermore, “Bong Dal-hui” has been criticized as a sly copy of the U.S. series “Grey’s Anatomy.” On the other hand, the producers of “The White Tower” are not afraid to admit that it’s based on a novel and drama of the same title from Japan.
In recent episodes, Dr. Jang succeeded in making his dream come true and he has now become his hospital’s chief surgeon. To get there he had to annihilate his enemies, but he simply does not care. He wants to cement his status, so he volunteers to do a tricky cancer surgery on the wife of the president of the Surgeons’ Association. While concentrating on the high-profile surgery, Dr. Jang neglects a more plebeian patient at his hospital, who subsequently dies. He succeeds with the big surgery but fails to save the poorer patient at his own hospital.
The producers deserve kudos for cutting back and forth between the scenes of Dr. Jang’s celebrity surgery and those of the other patient dying. There are no George Clooney types in “The White Tower,” but there is Kim Myeong-min, whose glaring eyes and articulate voice add fine spice to the drama.
I just checked the Web site for the show and was more than glad to find a message from the producers that says they want “The White Tower” to play a role in the renaissance of Korean TV dramas with a focus on developing more realistic characters. So all my best wishes for the success of “The White Tower.”