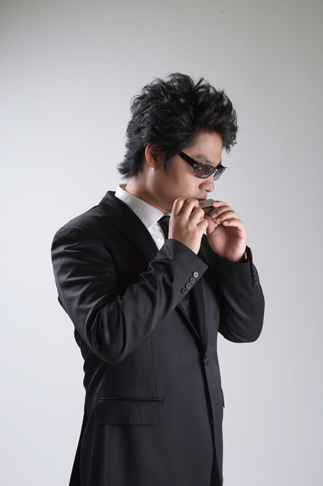 Jeon Je-duk is tired of being known as the blind harmonica man. “I have complained to various newspapers,” he said, with a tone that seemed to say that he had answered this question too many times. “I understand that this is an important part of my image, but they were so blunt and unimaginative about it, putting it right out there in their headlines.”
The musician, who released his second album two months ago, is on a mission to improve his outlook. “The album [‘What is Cool Change’] poses questions about optimism and hope, about whether we can look at things from different perspectives and learn to change,” he said.
Compared to his self-titled debut, this album brings out a sunnier side of the musician, with a lot of brass and jazzy electric sound effects complimenting his harmonica.
The orchestration is fuller and the scale is bigger, but instead of a melodramatic symphony with exaggerated choruses (which is often the case with instrumental musicians in Korea), Mr. Jeon resorts to well thought-out hooks and witty choruses in which a peppery brass bridge suddenly turns into a sultry, piano and guitar chorus that resembles the sound of running water, followed by a bluesy harmonica riff. The effect is complex and elegant.
“Many things have changed since my first album came out [in 2004]. Formerly, people thought of me as a session player, but now, with my second album, some people have said that they thought I had five albums out already ― which means that they have seen me in all kinds of media from print and radio to television,” the musician said. He plans to use the increased media attention to build an international profile, especially in Japan.
“In Korea, people prefer Lee Oskar’s sound [referring to the legendary Danish harmonica player]. In other words, the melodies and overall pattern should be uncomplicated and short, the chorus accentuated, like ‘Before the Rain’ [Lee Oskar’s 1978 album],” he said, adding, “Although putting out what people want to hear is one of the responsibilities of a musician, introducing things that they are not familiar with and pushing the envelope is important as well.” Mr. Jeon has heard, especially after his first album, that his music is a bit too unfamiliar to the Korean audience and he has been persuaded to have a more standard approach. “This made it hard for my producers,” he said, giving a mischievous smile.
After losing his sight after a bad case of measles 15 days after his birth, Mr. Jeon’s love of music began when he was a child. “In junior high, I would listen to people like Songgolmae and Kim Su-chul and think they were the coolest people on earth. In high school, I progressed to pop music, from the Beatles, Simon and Garfunkel to the Rolling Stones, Marvin Gaye and Prince. After high school, I got into jazz and listened to people like Duke Ellington and Charlie Parker,” he said.
When he was 14, his music teacher introduced him to janggu, a Korean percussion instrument, and he played in a traditional band called Daseureum which won first prize at the World Samulnori (traditional Korean band) Competition in 1993.
“There are not a lot of things that a blind person can do in Korea. This is different from countries like the United States in which society accepts this handicap and the blind can do many things as a career,” he said. “In Korea, many blind adolescents learn massage or acupuncture ― I learned this as well, but it wasn’t for me.” He said that if he wasn’t blind, he might have pursued other things besides music, but that for now, he is content with his work.
As for the current media spotlight on him he said, “Remember Lee Yong-bok [the blind musician often called the ‘Ray Charles of Korea’]? It has been some time, maybe 20 years or so, since Mr. Lee was last featured in a big way by the media. I think my time will pass soon and I hope with my presence, other musicians with handicaps can get a chance to do their thing,” he said.
The musician has a concert on March 31, at the Sungnam Art Center, Gyeonggi province and plans to have various concerts throughout the year.